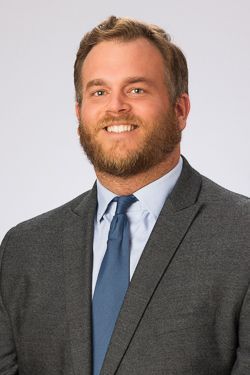 In his second season with the program, Bustle was part of a Valpo coaching staff that led the team to its second straight season with a Pioneer Football League record of .500 or better during the Fall 2021 campaign. That marked the first time Valpo had achieved that feat in consecutive seasons since 1999 and 2000. The Beacons won four Pioneer Football League games in the same season for just the third time ever (2017 and Spring 2021) and four league games in any conference for just the third time since 1968.

During the Fall 2021 season, Bustle’s offensive line paved the way for 23 rushing touchdowns, the third most in a single season in program history. The Beacons shattered a single-game program record with eight rushing TDs vs. Presbyterian. Valpo finished the season as the only team in FCS and one of four teams in all of Division-I college football (joining Army West Point, Oklahoma State and Michigan) with eight rushing TDs in a single game.

Bustle was part of an offensive staff that helped Valpo score 298 points during the Fall 2021 campaign, the fifth most in program history. During the Nov. 6 game vs. Presbyterian and the Nov. 13 game vs. Butler, Valpo totaled 112 points in a two-game span, tying the 2017 squad (vs. Marist, vs. Morehead State) for the program’s most points over two games since 1985. The team’s 65 points in the win over Presbyterian marked its highest single-game scoring output since 1996 and the fifth-highest single-game scoring output in program history.

The offensive line paved the way for Washington to rush for 234 yards vs. Presbyterian on Nov. 6, 2021, Valpo’s highest single-game total since 2012. That effort helped Washington earn national recognition by receiving a “Helmet Sticker” on ESPN’s College Football Final. In addition, running back Nick Orekoya rushed for four TDs vs. Presbyterian, tying a program record.

The offensive line boasted an All-PFL Honorable Mention choice and a pair of Academic All-PFL selections in Fall 2021.

In Spring 2021, Bustle’s offensive line helped Valpo eclipse 150 rushing yards per game for the second time in the last 12 seasons and first time since 2014. His line helped the Brown & Gold outrush opponents 910-668, its first time gaining more yards on the ground than the opposition since 2007. Bustle’s position group featured Aaron Byrd, an All-PFL Honorable Mention choice and an Academic All-PFL Second Team honoree.

Bustle joined the Valpo staff for the 2020-2021 season after serving as the co-offensive coordinator and offensive line coach at Holmes Community College, a post he had held since 2018. He previously occupied the role of co-offensive coordinator at Cumberland University in 2017. He has twice tutored offenses that have finished in the top 25 in the country in scoring, three times guided his team to the top six in the nation in rushing, three times coached an offensive line that was in the top 10 in the country in fewest sacks allowed and twice instructed an offense that finished in the top seven nationally in yards per completion.