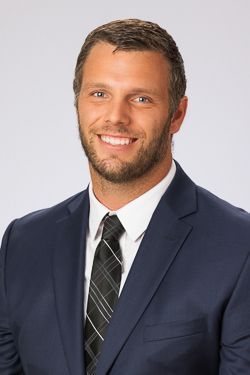 Land was part of a Valpo coaching staff that led the team to its second straight season with a Pioneer Football League record of .500 or better during the Fall 2021 campaign. That marked the first time Valpo had achieved that feat in consecutive seasons since 1999 and 2000. The Beacons won four Pioneer Football League games in the same season for just the third time ever (2017 and Spring 2021) and four league games in any conference for just the third time since 1968.

Land helped instruct a position group that thrived during the Fall 2021 season. The defensive line helped Valpo notch 32 sacks, the program’s most since 2000 and fifth-most in a single season in program history. Valpo ranked 15th nationally in FCS and led the PFL in sacks per game at 2.91. Valpo was also among the national leaders in tackles for loss per game at 7.3, ranking 15th in FCS. The team’s 80 TFLs were its most since 1984 and the second most in program history. Valpo had 18 tackles for loss in a single game vs. Presbyterian, tied for the most in the Division-I nation (FCS and FBS). The team’s 10 sacks vs. the Blue Hose were tied for the fifth most in FCS. Valpo had its highest single-game TFL total since at least 2004 and the program’s first double-figure sack total in over 20 years. Valpo had two safeties in a single game vs. Dartmouth, the first time the program recorded two safeties in the same season – let alone the same game – since 2006.

Valpo’s defensive linemen also played a role in Valpo leading the nation in blocked kicks with nine during the Fall 2021 campaign, the second most in program history and most since 1991. Valpo was the only team in all of Division-I college football (both FCS and FBS) to block nine kicks during the season. On Oct. 30 at San Diego, Valpo tied a PFL record for blocked kicks in a single game with three.

Land arrived at Valpo after previously serving as the offensive quality control coach at UC Davis in Spring 2021.

During his playing days, Land was the starting guard for the Cleveland Gladiators of the Arena Football League in 2017. He also started on the offensive line for the Salt Lake Screaming Eagles of the Indoor Football League for six games in 2017 prior to signing with the Gladiators.

A four-year letter winner at Weber State, Land played in all 46 games from 2011-2014 and started every game from 2012-2014. He was one of five offensive linemen to be selected to the Weber State All-Decade Team.

“I am very excited to join a great staff here at Valpo,” Land said. “I was impressed by the improvements this team has made in a short period of time and hope to contribute to more success. I am glad to be a part of this competitive team in a competitive league. So far, the players have worked their tails off and have a great attitude. I’m looking forward to what the future holds for this program.”