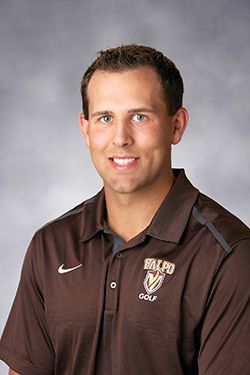 2013-14: Played in eleven events as a junior … ended the year with a 77.07 stroke average … led the team with an opening-round 68 at the John Piper Intercollegiate … round is tied for fourth-best in Crusader history by stroke count and second-best in relation to par (-4) … finished a career best t-4th at the John Dallio Memorial (224) … closed the season fourth all-time at Valpo in career scoring average (77.2) ... member of the Horizon League Academic Honor Roll.

2011-12: Participated in four tournaments during freshman season ... finished with a 77.6 scoring average ... shot an opening round 76 at the Ben Mussatto Invitational ... played in three tournaments during the fall campaign ... carded a season-best round of 71 at the Butler Fall Invitational ... tied for 22nd at Butler with a 54-hole total of 220 ... posted a fall scoring average of 77.3.

Prep: A four-year letterwinner for the Demons ... a First Team All-State selection as a junior and senior after earning Second Team All-State honors as a freshman and sophomore ... Southeast Iowa Conference champion as a junior ... a two-time All-Southeast Iowa Conference selection ... a two-time district champion ... won sectional title as a senior ... a member of National Honor Society ... also lettered in football and basketball.

Personal: Joe is the son of Jim and Ann Harris ... majors are accounting and actuarial science ... named to Dean's List and has earned Presidential academic honors during his time at Valpo ... born Dec. 25, 1991.