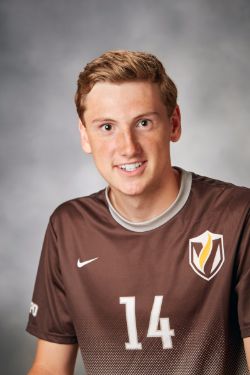 2017: Played in all 18 matches for the Crusaders, scoring one goal and accounting for two assists… Scored the golden goal to beat Loyola 2-1 on Sept. 1, helping the Crusaders dethrone the defending conference champions in their first-ever Missouri Valley Conference match…Handed out two assists on Oct. 3  at Northern Illinois, becoming the  30th player in program history with a multiple-assist game and the first since Zev Taublieb on Oct. 7, 2014 at IUPUI.

2016: Played in 17 matches as a redshirt freshman... Scored one goal on four shots, three of which were on frame... Scored his first collegiate goal in just his third career league match, a 2-1 victory over Cleveland State on Sept. 24. The goal came on an assist from Matthew Gweh in the 23rd minute, the first goal of the match... Pesek was the only Valpo freshman to score a goal in a Horizon League match in 2016. He and Steffen Pulinx were the only freshman goal scorers for the Crusaders. Pesek became the first Valpo freshman to score a goal in a league match since Ramone Howell on Oct. 25, 2014.

Prep: A two-year letter winner for the Red Devils … named an NSCAA All-American as a senior … also a member of the NSCAA All-Central Region team and Missouri State Player of the Year in Class 4 … district and St. Louis Metro Player of the Year as well … a Second Team All-Conference selection in 2013 … played club soccer for St. Louis Scott Gallagher for 14 years, finishing as NPL championship runner-ups in 2013 and 2014 … member of National Honor Society.

Personal: Jacob is the son of Greg and Debie Pesek … major is business.