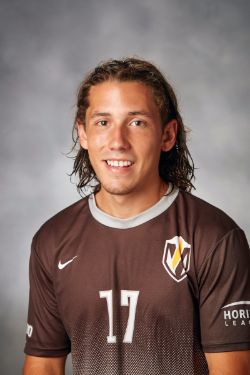 2015: Started all 18 matches for the Crusaders in his first season at Valpo ... a Second Team All-Horizon League selection ... earned a spot on the NSCAA All-Great Lakes Region Third Team ... paced Crusaders with five goals and 12 points on the season ... tied for seventh in the league in goals scored and ranked third in shots (66) ... led Horizon League and tied for 24th nationally with four match-winning goals ... played total of 1,695 minutes on the season, second-most among Crusader field players ... tallied brace in Valpo's win at Western Illinois on Sept. 4, including match-winner in extra time ... one week later, again scored golden goal match-winner, this time at IUPUI on Sept. 11 ... also assisted on Valpo's goal in regulation against the Jaguars ... found the back of the net for match-winning goal in Crusader victory at #18 Western Michigan on Sept. 23 ... made it four match-winners in an eight-match span with lone goal in 1-0 Valpo win at Milwaukee in Horizon League play on Oct. 3 ... picked up assist in Crusaders' 1-1 draw at #23 New Mexico on Oct. 14 ... put 33 shots on goal for the season.

2013-2014 (FGCU): A Second Team All-Conference selection as a sophomore ... finished 2014 campaign with three goals and two assists ... tied for team lead in assists, while his eight points were tied for second-most on the team ... named Atlantic Sun Freshman of the Year as a rookie in 2013 ... led all conference freshmen with 11 points, scoring four goals and tallying three assists.

Prep: Helped lead Eldorado H.S. to a pair of state championships ...  ranked No. 88 in the IMG Top 150 by TopDrawerSoccer.com during senior season … named to the inaugural U-17 Tournament Best 11 at the 2011 US Youth Soccer National Championships as a member of the Rush Nike 94 ... US Youth Soccer National League leading scorer in 2010-11 … nominated for Gatorade State Player of the Year in New Mexico in 2010 ... a First Team All-State, All-District and All-Metro selection in 2010.