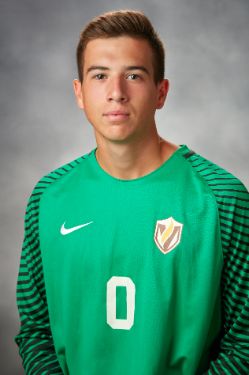 2017: Played in 16 games during his first season as Valpo’s starting goalkeeper, posting a 1.64 goals against average and a 7-8-1 record while racking up 61 saves… His season GAA of 1.64 ranks 10th in program history… Made seven saves in his first career start on Aug. 25 at Northwestern, the most saves by a Valpo keeper in his first career start since Marc Cilfone made 10 at Bradley in 2001… Notched a career-high eight saves on two occasions, Sept. 3 at DePaul and Oct. 21 at Central Arkansas… Was named to the College Soccer News National Team of the Week on Sept. 4 after earning MVP honors at the Chicago Classic, making 12 saves over two matches to help the Crusaders to the tournament championship. He notched four saves in Valpo’s 2-1 win over Loyola, a team ranked 18th nationally by Top Drawer Soccer entering the match… Named MVC Defensive Player of the Week on Sept. 6.

2016: Played in two games, totaling 60:15 in his second season on campus... Made his collegiate debut on Sept. 21 at Jesse Owens Memorial Stadium in Columbus, Ohio, playing 15:15 in a 4-1 loss to Ohio State. Miras did not surrender a goal in his debut... Logged 45 minutes in his second collegiate match, a 3-0 victory over Eastern Illinois on Sept. 27. He did not allow a goal and picked up the first save of his collegiate career... Over the last two seasons (2015 and 2016), Miras is the only goalkeeper other than graduated senior Nico Campbell who has seen match action.