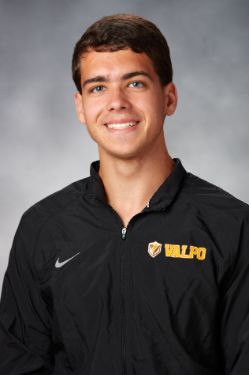 2019 (Cross Country): Competed in every meet for Valpo during his junior campaign, recording career bests in the 6K, 8K, five Mile and 10K… Opened the season with a 19th-place showing and a personal best 6K time of 19:12.5 at Valpo’s Crusader Open on Sept. 6… Recorded a career-best five-mile time of 25:16.72 on Oct. 4 at Notre Dame’s Joe Piane Invite… Ran his career-best 8K time at Bradley’s Pink Classic on Oct. 18, authoring a 35th-place finish (second on the team). His time of 25:07.0 cracked Valpo’s record book as the fifth-best 8K time in program history…. In the MVC Championships hosted by Valpo on Nov. 2, finished at 25:29.6 and earning All-Conference Honorable Mention. He finished 13th in the race and was fourth among non-seniors… Finished his season at NCAA Great Lakes Regional in Madison, Wis. on Nov. 15, completing the 10K course in 32:41.5, marking the fourth-best 10K time ever by a Valpo runner.

2018 (Cross Country): Ran in all meets for Valpo during his sophomore season…Turned in his season-best 8K performance at the Missouri Valley Conference Championships, finishing third on the team at 25:26.4…Added a second-place team finish at the Bradley Pink Classic, where he finished just outside the Top 60 in 25:41.3…Finished off the season with a 33:23.6 time in the 10K at the NCAA Great Lakes Regional, placing third on the team.

Personal: Son of Karen and Robert Paoletti ... major is meteorology.