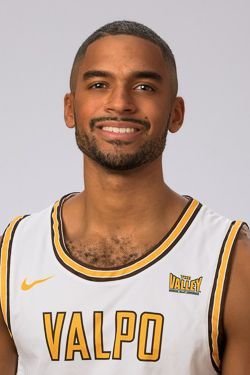 2018-19 & 2019-20: Spent two years in Japan serving a mission for his church, The Church of Jesus Christ of Latter-day Saints... Called it the toughest grind he's been through in his life but also the most rewarding, spiritual and uplifting thing he's done... Woke up at 6:30 a.m. each day, went for a run or did some pushups, got ready, studied the language for about an hour, studied with his companion and then served by teaching others and finding people to teach... Held a leadership position, so had to hop on a train and head back to mission headquarters for a full day of meetings on occasion... Did not have many chances to pick up a basketball during those two years. Did "hoop" a bit at the park in his suit and tie and "got a couple dunks in" wearing church shoes.

2017-18 (Basketball): Was a member of Valpo’s program… Sat out due to NCAA transfer requirements.

Carroll College: Averaged 6.3 points per game in 17.8 minutes per game as a freshman in 2016-17... scored in double figures on 10 occasions... sharpshooter connected at a 47.1 percent clip from 3-point range and a 94.2 percent clip from the foul line... also ran track and field, helping 4x400m relay squad to a sixth-place finish at outdoor nationals... Carroll is in the same conference as Montana State, where Steven's father is a Hall of Famer... Steven was born in the state of Montana... Didn't miss a free throw during Carroll's national tournament run. Carroll was regular season and conference champions and reached the national tournament, where he hit back-to-backs 3s late in a game to help his team to victory.

Prep: Product of Valparaiso High School.... led team to a 20-7 record as a senior, averaging a team-high 16.1 points/game along with 3.5 assists/game... led state of Indiana in free throw shooting, connecting at a 94 percent rate from the foul line... team MVP as a senior... named to the NWI Times All-Area Team, the Post-Tribune All-Area Second Team and to the Hoosier Basketball Top 60 in 2016... All-Conference honoree in both basketball and track and field... sectional champion in the 400m dash outdoors as a senior ... member of National Honor Society.

Personal: Son of Steve Jr. and Kelly Helm ... mother is an Associate Professor of Kinesiology at Valpo… Father Steve Jr. was an NAIA Third Team All-American at Montana State University-Northern and went on to play for the American Basketball Association’s Indiana Legends after his collegiate career. Steve Jr. followed his playing days with a coaching career that featured four seasons as an assistant on the Valpo women’s basketball staff... Frequently attended Valpo games and got to know former Valpo stars like Ryan Broekhoff, Erik Buggs and E. Victor Nickerson. Broekhoff was one of his mom's students... Considers himself a "movie buff" and "Star Wars nerd." Saving Private Ryan and Star Wards Episode 3 are his favorite movies... Is an eagle scout... Majoring in communication/digital media.