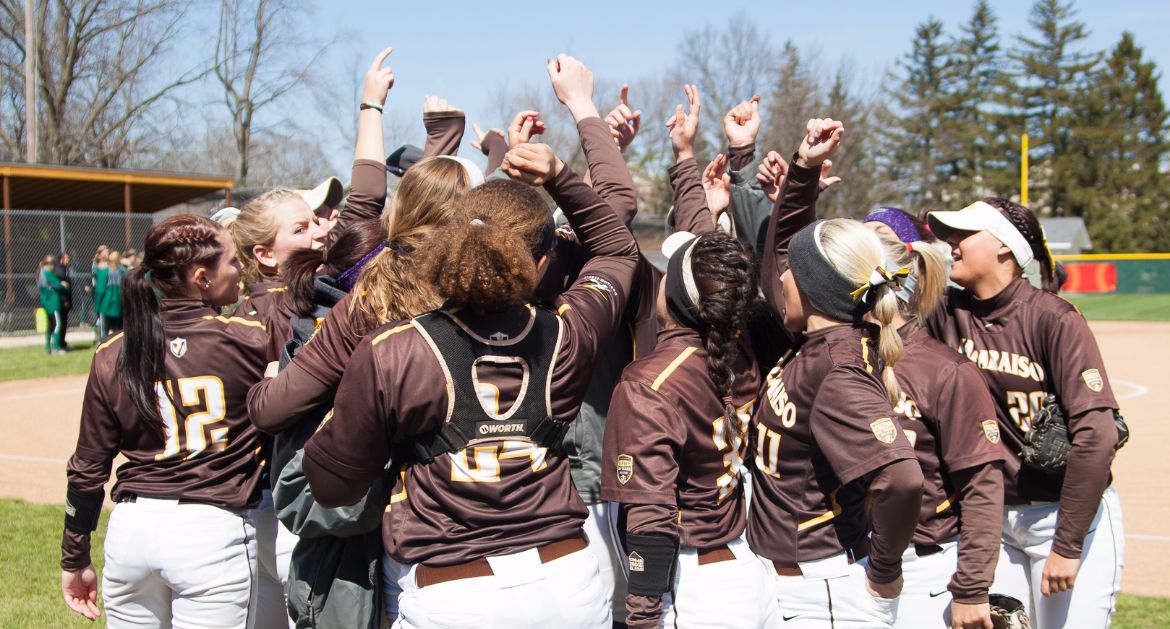 Next Up in Crusader Softball: The Valparaiso University softball team heads to the Horizon League Championship this weekend, hosted by UIC in Chicago, as the tournament’s sixth seed. The Crusaders, who claimed tournament titles in 2012 and 2013, will face third-seeded Youngstown State at 2:30 p.m. on Wednesday afternoon to open play at the double-elimination event.

Following the Crusaders: The entirety of the 2016 Horizon League Championship will feature live video broadcasts on ESPN3.com. Links for the live video, as well as live stats, will be available at ValpoAthletics.com. The @ValpoSoftball Twitter account will also feature live in-game updates.

Head Coach Kate Stake: Kate Stake was hired as head coach of the Valparaiso softball program on July 23, 2014 and owns 30 wins in her second season as head coach. Stake arrived at Valpo with eight seasons of assistant coaching experience at the Division I level, most recently serving as an assistant at mid-major power Hofstra.

Crusaders All-Time in the League Tournament: Since joining the Horizon League, Valpo boasts a pair of league tournament titles and has advanced to Championship Saturday on three occasions. The Crusaders own a 20-14 mark in the Horizon League Championship, including a 16-6 record in potential elimination games. Valpo holds a winning record in tournament play against four of the other five schools at this year’s tournament: 2-1 vs. CSU, 2-4 vs. Green Bay, 5-2 vs. UIC, 3-2 vs. WSU and 4-1 vs. YSU.

All-League Honorees: Valpo had two players honored on Tuesday as the league announced its postseason awards. Senior pitcher Taylor Weissenhofer received Second Team All-League honors for the second time in her career, as she closed out the regular season second in the league in strikeouts both overall and in league-only play, while hitters batted just .207 against her in league action. Meanwhile, freshman second baseman Carly Trepanier joined Weissenhofer on the Second Team All-League and was also an All-Freshman Team selection. Trepanier hit .342 overall as a rookie with 18 runs scored and bumped her batting average to .403 in Horizon League play - one of just three league players to hit better than .400 in league-only competition.

A Veteran Group: Unlike last year’s squad, which featured a myriad of freshmen, this year’s Crusader team has just one newcomer - freshman Carly Trepanier. From last year’s 17-player roster, 15 players are back in 2016.

Trepanier On a Roll: Trepanier enters the league tournament as the hottest hitter on the Crusader squad, having reached base in 21 consecutive games. The freshman is also on a nine-game hitting streak, including five multi-hit games in her last eight outings. Over that stretch of eight games - a stretch where she is hitting 16-for-31 (.516) - Trepanier’s season batting average has risen 61 points. The highlight of her recent hot streak came in Valpo’s win over Wright State last Saturday, as Trepanier went 4-for-4 with a leadoff home run and three runs scored to help lead the Crusaders to the victory.

Weissenhofer Comes Up Big: Weissenhofer stepped up when the Crusaders needed her in the circle at Wright State last weekend. The senior surrendered just four hits in 8.1 innings of work in a tough-luck loss in the series opener, but rebounded in the middle game of the series, entering in relief and pitching 3.2 innings of one-hit ball to earn the win in a one-run victory. In her 12 innings of work against the Raiders, Weissenhofer allowed batters to hit just .135 against her. Over her last nine appearances since April 15, Weissenhofer has struck out 57 batters in 50 innings while allowing opponents to hit just .133.

Montgomery Shuts Down the Grizzlies: Sophomore Ashlyn Montgomery had made just one start in the circle this season and had tossed just 15.2 innings in Horizon League play before getting the ball in the series finale against Oakland. But she was up to the task, limiting Oakland to just two runs on four hits - all four of which came consecutively in the third inning, as she retired 21 of the other 22 batters she faced. Montgomery’s big win over Oakland highlighted a Horizon League campaign in which she posted a 2.15 ERA in 26 IP, allowing opponents to hit just .227 off of her.

New Records This Year: A pair of Crusader seniors have set new Valpo career records already this year. In the circle, Taylor Weissenhofer broke Valpo’s career strikeouts record in the Crusaders’ third game of the year - Feb. 13 versus St. John’s - and now owns 578 career K’s, while she also broke the program’s record for appearances by a pitcher late this season - a mark which now stands at 143 appearances. At the plate, Kaitlyn Ranieri drew a walk in her first plate appearance of the year to set a new Valpo career record in that category and currently has 122 career walks.

Moving Up the Charts: While Ranieri already tops the career walks chart, she is continuing to advance on a number of other career charts as she nears the close of her career. The senior is currently tied for second in Crusader history in doubles (45), third in hits (224, one shy of second), third in total bases (350), tied for third in home runs (25), third in RBIs (116) and fourth in runs scored (129, three shy of third). She also ranks fourth in batting average (.350), second in on-base percentage (.461) and fourth in slugging percentage (.547).

Single-Season Marks: As the season nears its end, a number of Crusaders find themselves inside or within striking distance of Valpo’s single-season top-10 charts. Taylor Lawson has stolen 21 bases on the season, tied for fifth-most in a single year in program history (and moving her into a tie for third in program history with 39 career steals). Weissenhofer has tallied 136 strikeouts in the circle, leaping into fifth place in Crusader single-season history last weekend - just three punchouts shy of fourth position. Jasmine Ramirez is currently tied for ninth on Valpo’s single-season chart in fielding percentage (.992), while both Ranieri (24 walks) and Lawson (23 walks) are closing in on the top-10 for walks, needing just two and three more free passes, respectively.