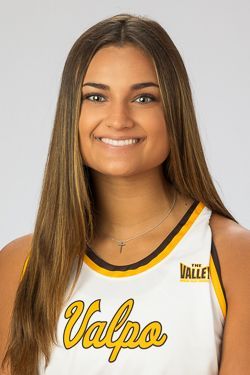 2020-21: Played in all 25 games, making one start ... averaged 3.0 points and 1.3 rebounds per game in 14.6 minutes/game of action ... led team in blocked shots twice and steals once ... matched then-career high with nine points on three 3-pointers and set career best with six rebounds in win at Illinois Dec. 2 ... followed up four days later with a career-best 10 points, including a pair of triples, in win at Purdue ... made first career start Dec. 8 at Miami (Ohio) ... went 3-for-4 from the field, including two 3-pointers, for nine points in Dec. 16 victory over Xavier ... surpassed career high yet again with a 12-point effort at Wisconsin Dec. 20, connecting on four 3-pointers ... knocked down a pair of triples for six points in win over Bradley Feb. 4.

2019-20: Saw action in 20 games off the bench for Valpo as a freshman, playing 9.5 minutes/game ... averaged 1.7 points and 1.2 rebounds per game ... led team in blocked shots four times and rebounding once ... debuted with 11 minutes of action Nov. 10 versus Ohio State ... scored a season-high nine points and grabbed four rebounds in overtime win over Bowling Green Nov. 24 ... after not playing in the first half against the Falcons, played 18 of the 25 second-half/overtime minutes ... went 3-for-4 from behind the arc in the win over BGSU ... pulled down season-best five rebounds in win over UIC Dec. 15 ... scored seven points, hitting both her field goal attempts and both her free throws, in Dec. 28 win over Chicago State ... connected on both of her 3-point attempts for six points to go with team-high four rebounds and season-best two steals in MVC win at Evansville Jan. 12 ... handed out pair of assists in win at Illinois State Feb. 16.

Prep: A four-year letterwinner at Coopersville H.S. ... an Honorable Mention All-State selection by the Detroit Free Press, the Detroit News and the Associated Press as a senior ... also earned Honorable Mention All-State notice from the Free Press as a junior ... selected to play in Addix Bank Champions Classic, featuring the top seniors from the greater Grand Rapids area ... a three-time All-Conference and two-time All-Area performer ... also played volleyball and competed in track and field.