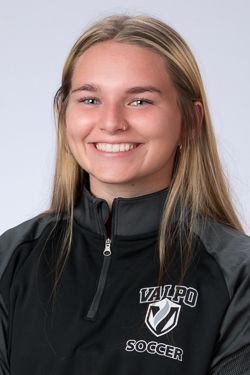 2019: Appeared in six matches off the bench ... played a total of 173 minutes, including a season-high 71 minutes at Canisius Sept. 8 ... tallied four shot attempts on the year, three of which were on goal.

Prep: Earned All-Area and All-Conference accolades each of the her first three seasons playing for Westmont ... team MVP each of her first three seasons as well ... helped lead Westmont to regional championships as a freshman and as a sophomore, the first two regional titles in program history ... most recently played club soccer for Chicago Inter, which she helped to a second-place finish in the Midwest Regional League and which captured the 2017 CASL College Showcase event ... previously played club for Oak Brook Soccer Club.