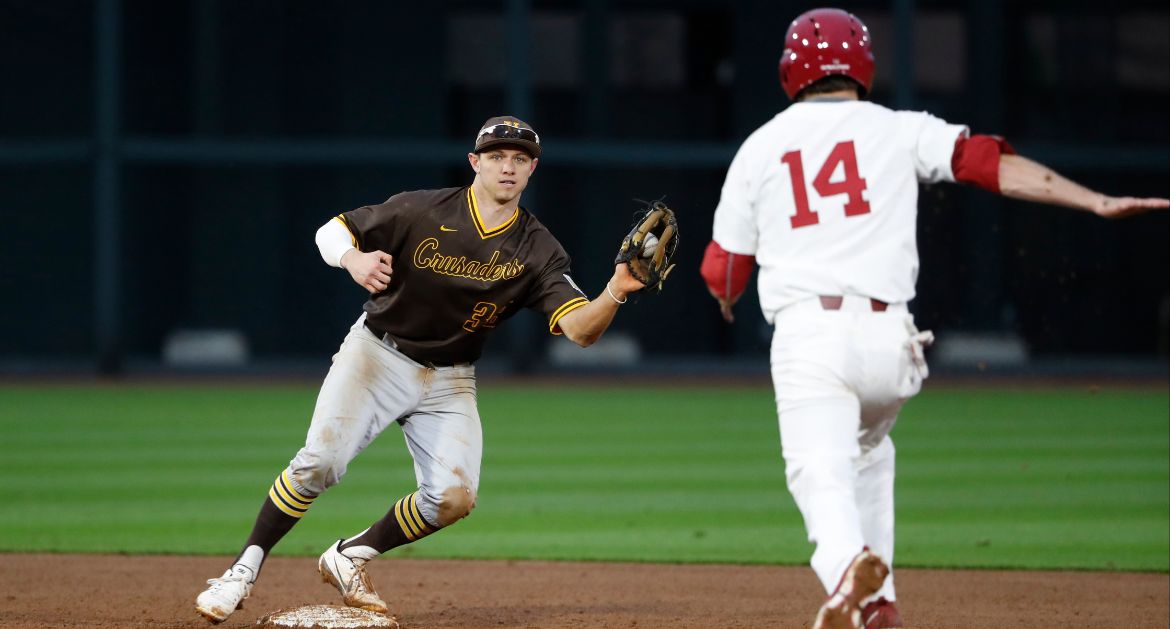 Next Up in Crusader Baseball: The Valparaiso University baseball team will continue its challenging nonconference slate this weekend by heading to L. Dale Mitchell Park in Norman, Okla. to play a pair of games against both Holy Cross and the host Sooners. After visiting a team from the SEC, which finished second nationally in conference RPI a year ago, the Crusaders will clash with Oklahoma – a member of the Big 12 Conference, first nationally in conference RPI last season. Both of this weekend’s opponents played in the NCAA Tournament last year.

Last Time Out: The Crusaders were swept at the hands of Alabama in the season’s first series. The Crimson Tide took the opener 16-2, but the remaining games were much closer, with Valpo falling 6-5 on Saturday and 12-6 on Sunday. The Crusaders led for most of Saturday’s game before the Crimson Tide tied it with a run in the eighth and walked off in the bottom of the ninth.

On the Air: Live stats for all four games this weekend will be available. The games against Oklahoma on Saturday and Sunday will air on Sooner Sports TV (subscription required) and Sunday’s game against the Sooners will have free audio available. Links to all the coverage can be found on ValpoAthletics.com.

Series Notes – Holy Cross: The battle of the only two Division I teams known as the Crusaders will take place for the first time since March 3, 2003, a 5-3 Holy Cross win in Bradenton, Fla. The two teams split a doubleheader on March 9, 2000 in Fort Myers, Fla. Valpo won the opener 24-7 before dropping the second game 6-3. Holy Cross leads the all-time series 2-1.

Series Notes – Oklahoma: The Crusaders and Sooners have played one another on just one prior occasion – Feb. 26, 2010 in Jacksonville, Fla. Tracy Woodson’s squad fell 12-9.

First Impression: The two newcomers in Valpo's starting lineup - first baseman Zack Leone and left fielder Blake Billinger - thrived on the opening weekend, combining to go 12-for-24 with 17 total bases and three extra-base hits in three games against Alabama. In the Friday game, Leone became the first Valpo player to lash out three hits on Opening Day since 2012. In that same game, Billinger became the first Crusader newcomer in a decade to homer on Opening Day.

Opening Day Nod: Head coach Brian Schmack handed sophomore Jon Tieman the ball for the first game of the season, making the right-hander the first Valpo underclassman to get the Opening Day start since Bryce Shafer in 2009. Six of Valpo's previous seven Opening Day starters were seniors. Tieman finished last season with a 4-1 record, seven saves and a 2.93 ERA, earning Freshman All-American honors and a place on the Horizon League all-freshman team.

Wrapping Alabama: The weekend may have resulted in three losses to a team that plays in the conference that finished second nationally in RPI last season, but there were numerous encouraging signs during the series. The Crusaders held the lead at some point in all three games, including for the majority of Saturday's 6-5 loss. The offense thrived, banging out 13 hits on Saturday and 11 more on Sunday and hitting .305 for the weekend. Friday's series opener was Valpo's first matchup with an SEC team since upsetting Florida in the opening round of the 2013 NCAA Regional.

Dawson Starts Strong: Chase Dawson had a strong showing on the first weekend of his junior season, finishing as one of five Crusaders to hit .300 or better. He batted .462 with two extra-base hits, nine total bases and three runs scored. He had three hits and three RBIs in the middle game of the series, both matching career highs, leading the way on a day where eight of the nine players in the lineup had at least one hit. Dawson had his second consecutive multi-hit output on Sunday, including the first triple by a Crusader this year and the fourth of his career. He’s already matched his season total for triples from a year ago. Dawson shares the team lead in RBIs with Billinger at four apiece.

Bullpen Bright Spot: The only Valpo pitcher who saw action and was not charged with a run in the Alabama series was left-handed reliever Chet Joslyn. He worked in both the Friday and Sunday games, totaling 1 2/3 innings of scoreless ball and yielded no hits. The fifth-year senior finished last year on a high note, as he did not allow a base runner in four of his last five outings.

Hard to Hit: Although control was a concern in his first game action in two years, right-handed pitcher Trey Ferketic was tough to touch when he found the zone in his Saturday start against the Crimson Tide. He yielded only two hits over four innings and owns an opponents’ batting average of .154.

In The Other Dugout – Holy Cross: Holy Cross made a statement right away, knocking off No. 24 Houston 3-2 on Opening Day. After dropping the middle game 7-1, the Crusaders took the series finale to extra innings before falling 3-2 in 10. That marked the second straight season Holy Cross knocked off a nationally-ranked opponent, as it defeated No. 25 Nebraska in the NCAA Tournament a year ago. Holy Cross won the Patriot League last year to secure that NCAA Regional appearance. The Crusaders are under the direction of 11th-year head coach Greg Dicenzo. The team is led offensively by Thomas Russo (4-for-10 in three games), while Zane Hedaya is projected to get the Friday start after working 3 2/3 scoreless frames with seven strikeouts out of the bullpen last weekend.

In The Other Dugout – Oklahoma: Holy Cross isn’t the only team that Valpo will play this weekend that started the season with a win over a nationally-ranked opponent. In the debut of first-year head coach Skip Johnson, the Sooners topped No. 20 Indiana 6-3 in Myrtle Beach, S.C. After that win, Oklahoma lost three straight on the opening weekend at the “Baseball at the Beach” event, falling in extra innings twice. One of the losses came to No. 17 South Alabama in 12 innings. The Oklahoma offense is led by Cade Harris with a .571 average, five extra-base hits, four RBIs and 14 total bases.

Inside the 2018 Crusader Offense: The Crusaders return six of the nine players who started last year’s season finale… Junior third baseman Sam Shaikin was the only Crusader to start all 53 games last season and hit a team-best .317. He finished with 20 multi-hit games, the most of any Crusader, and enjoyed a 23-game on-base streak, Valpo’s longest of the season… Entering a game against Northern Kentucky on April 9, Giovanni Garbella was hitting .213 with no home runs and eight RBIs and was a career .204 hitter over three years. From that point forward, he hit .380 with five home runs and 24 RBIs over the final 25 games of the year… Christian Barczi was named to the Horizon League all-freshman team, one of three Crusaders to receive that honor. He led the team in batting average in league-only games at .343 in 20 contests… Junior catcher Scott Kapers threw out 41.5 percent of would-be base stealers last season. He finished the year on a season-long six-game hitting streak and hit a team-high .378 over the final 14 games of the season after entering that stretch with a .231 average… Junior second baseman Chase Dawson batted .364 over the final month of the season (April 23 – May 24) in 16 games, leading the team in batting average and on-base percentage (.517) during that stretch. Dawson made just two errors all season in 205 chances (.990) after making 15 errors (.935) as a freshman… Senior shortstop Chad Jacob finished with a .291 batting average in 34 games a year ago. He missed time early in the season with a wrist injury and the end of the season with a concussion… First-year Crusader Blake Billinger is starting in left field after earning unanimous first-team all-conference honors in each of his two junior college seasons… Senior Zack Leone starting at first base in his first year at Valpo after setting a Susquehanna (Division III) program record for career doubles and ranking second in program history in batting average, RBIs and home runs.

On the Mound – 2018 Crusaders: Sophomore Jon Tieman made 20 appearances and four starts during his freshman season, earning Horizon League All-Freshman Team accolades while becoming the first Crusader to be named a Freshman All-American since shortstop Spencer Mahoney in 2012. Tieman enters 2018 as one of three Missouri Valley Conference players who were Freshman All-Americans a year ago, joining Bradley’s Brendan Doherty and Illinois State’s John Rave. The Valpo right-hander shared the team lead in wins by going 4-1 and held the team watermark in strikeouts (51) and saves (7). His seven saves put him in a tie for eighth in program history in career saves after less than a full season as the team’s closer. He finished the year with an ERA of 2.93 over 46 innings… Trey Ferketic has transferred in as a fifth-year senior for his final season of eligibility and will assume the role of Saturday starter…Wes Gordon has been tabbed the Sunday starter after an injury limited him to nine starts in his first year at Valpo in 2017... Sophomore Easton Rhodehouse burst onto the scene by appearing in 25 games out of Brian Schmack’s bullpen during his rookie campaign. He shared the team lead with four wins while posting a 2.43 ERA over 33 1/3 innings of work. Rhodehouse yielded just 10 walks while striking out 40 and earning three saves. He was honored as the Horizon League Pitcher of the Week on May 15, becoming the first Valpo reliever to win the award since 2013 and the first Crusader true freshman to receive the honor since 2008. The right-hander was one of a league-high three all-freshman team honorees for Valpo… Sophomore Jake Larson closed his freshman season on a high note, totaling 10 2/3 scoreless innings of relief against Northern Illinois (May 3) and UIC (May 14).