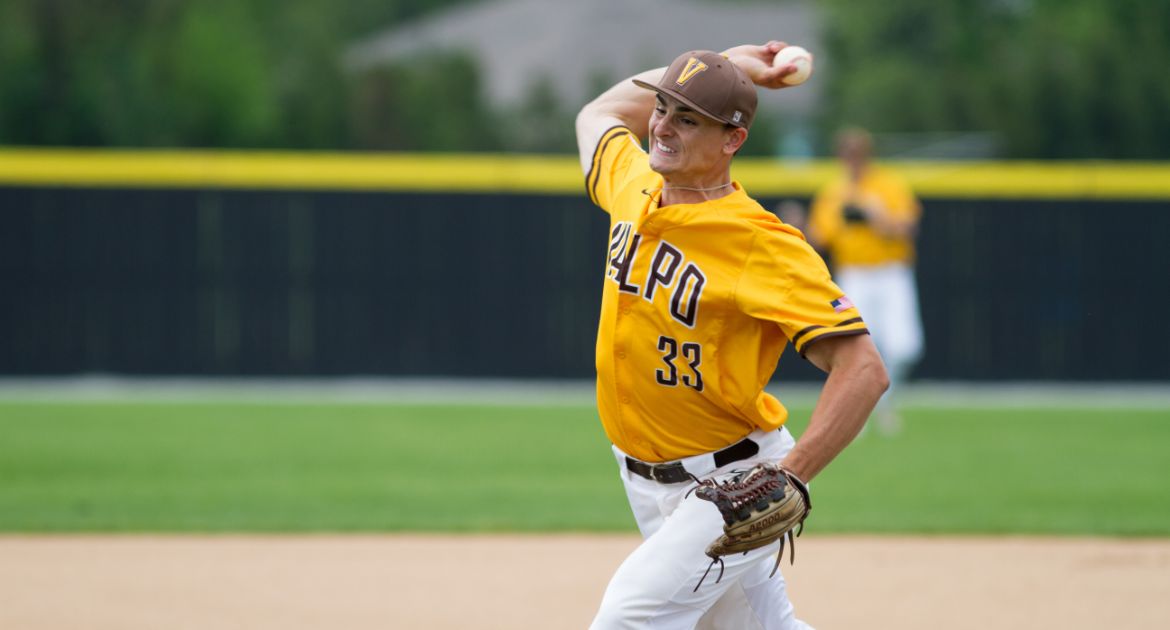 Next Up in Crusader Baseball: The regular season reaches its conclusion this week as Valpo welcomes in-state foe Indiana State for a three-game series that begins on Thursday. The Crusaders and Sycamores will go at it in an important set as teams across the conference battle for seeding in next week’s Missouri Valley Conference Tournament. The series will culminate with Senior Day on Saturday as the Crusaders recognize their 10-member senior class prior to the group’s final game at Emory G. Bauer Field.

A Look Back: The Crusaders won a thrilling series opener 2-1 last week at Illinois State, but went on to drop two of three to the Redbirds. A Valpo offense that has shown an ability to do significant damage over the course of the season was quieted this past weekend, as Valpo mustered up just five runs over the three games. Jon Tieman made two runs hold up in a valiant effort on Friday, earning his fifth win of the season with a 132-pitch complete game. Jayden Eggimann made a sprawling catch for the final out, causing Illinois State to strand the potential tying run at second and winning run at first in the bottom of the ninth. The Redbirds won 13-3 on Saturday and 8-0 on Sunday. Valpo bounced back with a quality comeback on Tuesday against Chicago State. The Crusaders had two outs and nobody on base, down 2-1 in the bottom of the ninth, before four straight reached including Blake Billinger, whose two-run single sent Valpo to a 3-2 walk-off win.

On the Air: All three games in the series will air on 95.1 FM Valparaiso (online on the TuneIn Radio App) and have live stats available via StatBroadcast. Coverage links can be found on ValpoAthletics.com. For in-game updates, follow @ValpoBaseball on Twitter.

Series Notes: The Crusaders and Sycamores have an extensive history against one another, with Indiana State leading the all-time series 40-30-1. Thursday will mark the first meeting since April 17, 2012, when the Crusaders fell 2-1 in a 16-inning marathon. The Crusaders have lost five straight head-to-head meetings dating back to March 31, 2007, an 11-2 win at Indiana State. Indiana State will be playing at Emory G. Bauer for the first time since 2011.

Seniors in the Spotlight

Cardiac Crusaders: The Crusaders were down to their final strike with nobody on base down by a run on Tuesday, but a pinch hit single by Riley Dent started the game-winning rally as the Crusaders eventually pulled out a 3-2 win over Chicago State. That marked the first time since March 26, 2016 Valpo has won when trailing after eight innings. The Crusaders had dropped 62 straight games when behind after eight. While one long streak ended, another one continued, as the Crusaders garnered their 22nd straight win in the head-to-head series with the Cougars.

Billinger Doubles Watch: Valpo’s Blake Billinger is on the verge of etching his name atop the program’s all-time doubles list. He smoked his 22nd double of the season on Sunday against Illinois State, snapping a four-way tie and taking over sole possession of second in program history for doubles in a single season. He needs just one to tie and two to break Kyle Muhlsteff’s single-season program record of 23 established in 2010.

A Glance at the Standings: Going into the final weekend, there’s still a lot to be determined when it comes to seeding for next week’s Missouri Valley Conference Tournament in Dallas. The Crusaders currently sit in seventh in the league standings and have clinched no worse than seventh as Evansville is locked into eighth, four games in back of Valpo entering this weekend. Valpo could climb to as high as fourth in the conference standings, but for that to occur the Crusaders must sweep Indiana State, Bradley must sweep Southern Illinois and Illinois State must drop at least two of three to Evansville. Valpo fans should root for Bradley and Evansville in their respective series this weekend. The team that finishes seventh in the conference standings will have to play either Missouri State or DBU in the first round of the double-elimination tournament.

Six is The Magic Number: Valpo is just 3-25 this season when scoring five runs or fewer. When the Crusaders score six runs or more, they own a 15-4 mark. Valpo’s first win of the season when scoring five runs or fewer was on May 11, a 2-1 victory over Illinois State. They followed that with their second win of the year in such games on Tuesday, beating Chicago State 3-2.

In The Other Dugout – Indiana State: The Sycamores enjoyed a senior day win on Sunday by capturing the rubber match of a three-game set with Evansville in high-scoring fashion, 14-9. Picked to finish third in the MVC Preseason Poll, the Sycamores enter this weekend tied for fifth in the conference standings with Southern Illinois. They are two games behind third-place Bradley and one game ahead of sixth-place Illinois State. Indiana State is under the direction of Mitch Hannahs, who returned to his alma mater in 2013 to take over the program. The former Milwaukee Brewers draft pick has guided the team to winning conference records in three of his first four seasons and has seen nine MLB draft picks under his watch. One of this year’s offensive leaders is Dane Giesler, who is hitting .299 to go along with 12 home runs and 38 RBIs. The 12 homers are tied with DBU’s Tim Millard for the league lead. Also a key threat is Romero Harris, hitting .344 with eight home runs and 31 RBIs in just 24 games. The team is third in The Valley in league-only batting average at .262, trailing only DBU and Missouri State. Triston Polley leads the pitching staff with a 3.61 ERA and 6-2 record in 13 starts.

5-for-5: Scott Kapers became the third Valpo player with a five-hit game this season on May 8 at Western Michigan, joining Chase Dawson and Blake Billinger. Before this year, Valpo hadn’t had more than one player post a five-hit game in any of the previous seven seasons. Kapers joined Billinger as the second Valpo player to go a perfect 5-for-5 this year after previously that feat had not been accomplished by a Crusader since 2010.

More Western Michigan Tidbits: Valpo and Western Michigan combined for 64 total bases, the most in a Valpo game since Valpo and Butler combined for 73 on April 26, 2008. Valpo totaled 35 bases, the most by the Crusaders since they had 40 on April 3, 2010 against Chicago State. Valpo had six hit batters in the game, the team’s most since at least 2005. The Crusaders also set 2018 game highs in home runs with four and matched two other games (against Milwaukee and Grand Canyon) for the season high for hits with 18.