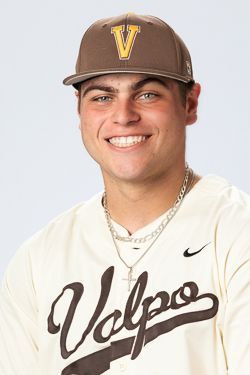 2022: Appeared in 47 games, all starts, and hit for a .292 average that ranked third on the team... Tied for the team lead in both home runs (seven) and RBIs (27) while also notching 10 doubles, a triple and 27 runs scored... Slugged .470 and reached base at a .382 clip... Led the team with eight stolen bases... Hit a home run on his 21st birthday on March 19 at Murray State... Followed that by tying a season high with three hits in the March 20 series finale, a victory at Murray State... Reached base 10 times in the April 1 doubleheader at UIC and made an impressive catch while crashing into the left-field fence in the eighth inning, a play that checked in at No. 9 on D1Baseball.com’s Top 10 Plays of the Week... Posted his first career two-homer game on April 16 at Illinois State, a 10-2 victory over the Redbirds. He scored four runs in that game, becoming the first Valpo player to score four times in a game since May 8, 2018 vs. Western Michigan (both Chad Jacob and Blake Billinger)... Reached the 100 career hit milestone on April 29 at SIU... Had a team-high 17 multi-hit games... Earned Valparaiso University Presidential Academic Honors.

2021: Appeared in all 51 games and made 50 starts… Ranked fourth on the team with a .264 batting average… Tied for second on the club with 24 RBIs and ranked second on the team with nine doubles… Had has a triple and two home runs to go along with 23 runs scored, which ranked second on the squad… Drew 13 walks and was hit by a pitch on nine occasions… Had 12 multi-hit games including a season-high three hits on May 16 vs. Evansville… Launched his first collegiate home run on May 15 vs. Evansville before drilling a second long ball in the final game of the season on May 28 at Southern Illinois… Batted .308 during the final series of the regular season at Missouri State (May 20-22)… Had six multi-RBI games including a pair of games where he drove in three runs, April 27 at Notre Dame and May 8 at Bradley… The three RBIs at nationally-ranked Notre Dame on April 27 came in the form of a go-ahead, bases-clearing double… Hit safely in 12 straight games in late March and early April… Over the final 15 games of the season, hit a team-high .304 with two home runs, a .464 slugging percentage, a .381 on-base percentage and a team-high 14 RBIs… Member of MVC Academic Honor Roll.

2020: Appeared in 12 games and made nine starts during the COVID-19 shortened season… Three of his five hits went for extra-bases… Scored three runs and drove in four while working three walks and being hit by a pitch once… Drove in a run in his collegiate debut on Feb. 15 at Western Kentucky… Notched his first collegiate hit with a two-bagger on Feb. 23 at No. 3 Louisville… Had his lone multi-hit and multi-RBI game of the season on March 10 at Alabama State.

Before Valpo: Was the MVP of the Indiana North/South All-Star Game in June 2019 following his senior year of high school… Was an all-state and all-area selection while being tabbed the LaPorte County Player of the Year… Was a four-year letter winner in baseball while also earning four varsity letters in football… Member of National Honor Society.

Personal: Son of Cari and Brian Schmack… Is the first student-athlete to play for his or her parent as a head coach at Valpo since Bryce Drew in 1998… Has two sisters, Ella and Riley… Birthday is March 19… Majoring in business finance… Hobbies include Fortnite, working out, watching The Office and playing pickup basketball… Favorite food is steak, movie is Good Will Hunting, pro baseball team is the Chicago White Sox, MLB player is Nolan Arenado, musical group is Migos and TV show is The Office.