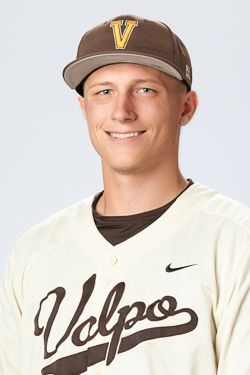 2020: Appeared in eight games and made six starts during the COVID-19 shortened season… Was one of four players in the nation to start six games, tying for the NCAA Division-I lead in that category… Ranked third on the team in ERA at 3.45... Struck out a team-high 20 while issuing just four bases on balls over 15 2/3 innings… Did not allow a run in any of his final four appearances – all starts – a scoreless streak that spanned nine innings in which he permitted just five hits and issued two walks… Picked up the victory over three scoreless innings on Feb. 17, an extra-inning triumph at Western Kentucky. He sent down all nine men he faced and struck out four of them… Struck out four of the six batters he opposed over two scoreless innings on Feb. 28 at McNeese.

2019: Received All-MVC Honorable Mention… Finished the 2019 season with a team-best 3.82 ERA over 22 appearances out of the bullpen, grabbing two wins to go along with four saves… Secured 44 strikeouts while walking 13 in 35 1/3 innings… Enjoyed a bounce-back season after finishing the 2018 campaign with a 9.68 ERA… Worked one inning and did not allow a run on March 10 at No. 25 South Carolina… Pitched three perfect innings and struck out four to garner his first decision of the season, a well-earned win in a 7-6 triumph over Northern Illinois on March 16 in Game 1 of a doubleheader at Chicago State… Pitched a scoreless inning in both games of a doubleheader against Butler on March 23 and nailed down his first save of the year in the nightcap… Remained a bright spot of the pitching staff with three innings of one-run ball on March 31 at DBU. He allowed just two hits and one walk and faced six total batters of his final two frames… Continued his strong season by putting up zeros in the eighth and ninth innings of a 4-2 win over Illinois State on April 6 as he stranded base runners in both frames. That allowed him to nail down his second save of the season… Worked two clean innings out of the Valpo bullpen on April 28 in the second game of a doubleheader vs. Evansville… Nailed down his third save of the season and the seventh of his career on May 4 at Bradley by working a one-two-three ninth. He climbed into a tie for eighth in program history in career saves… Worked a scoreless eighth inning on May 8 at Michigan State… Set career highs in innings pitched (six), strikeouts (eight) and pitches thrown (85) in a dominant relief outing to pick up the win in a 4-3, 14-inning victory over Southern Illinois on May 10. He did not allow a hit and walked two while pitching the ninth through 14th innings… Became the first Valpo player to earn an MVC Pitcher of the Week Award since the program joined the conference on May 13. That same day, he was also named one of six national Players of the Week by Collegiate Baseball Newspaper. His outing against Southern Illinois was the seventh-best pitching performance in the nation that night according to D1Baseball.com’s “game score” as he had a 78, a particularly impressive feat for a reliever… Wiggled out a jam with the tying run in scoring position to nail down his fourth save of the season in a 4-3 win over Chicago State on May 14… With one season still remaining, already ranks tied for seventh in program history in career saves.

2018: Made 16 appearances and worked 17 2/3 innings as a sophomore for the Crusaders… Did not allow an earned run in any of his five conference outings with opponents hitting just .211 against him in conference play… Notched his lone save of the season on March 17 in the second game of a doubleheader at Arkansas Pine Bluff. Was summoned in a critical spot in the eighth with Valpo leading by two and induced an inning-ending double play before heaving a scoreless ninth to secure a 12-8 victory… Also had scoreless outings at Grand Canyon (March 3), at Purdue (March 28), vs. Bradley (March 30), vs. DBU (April 27) and in his final appearance of the season at Illinois State, when he threw two frames on May 12.

2017: Burst onto the scene by appearing in 25 games out of Brian Schmack's bullpen during his rookie campaign... Shared the team lead with four wins while posting a 2.43 ERA over 33 1/3 innings of work... yielded just 10 walks while striking out 40 and earned three saves... Made his collegiate debut with three scoreless frames on Feb. 19 at Western Kentucky, racking up four strikeouts and yielding just one hit and one walk... Picked up his first career save on April 8, pitching 1 1/3 scoreless frames to close out a 10-9 win over Northern Kentucky... A day after recording a save at Milwaukee, retired all 12 batters he faced and racked up a career-high seven strikeouts to earn the win with four shutout innings of relief in a 7-6 victory over eventual Horizon League regular season and tournament champion UIC on May 14... Honored as the Horizon League Pitcher of the Week on May 15, becoming the second reliever and first freshman to win the award in 2017... Became the first Valpo relief pitcher to win the Horizon League Pitcher of the Week award since Karch Kowalczyk on May 6, 2013 and the first Crusader true freshman to win the award since Bryce Shafer on March 4, 2008... Named to the Horizon League All-Freshman Team, one of a league-high three all-freshman honorees for Valpo... Helped the Crusaders place three players on the all-freshman team for the first time since 2013 and made it the seventh straight year Valpo has had multiple players earn spots on the all-freshman squad.