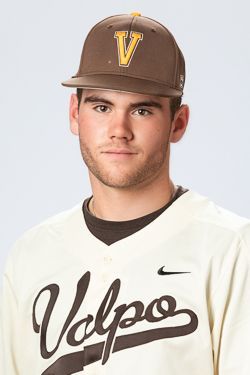 2022: Finished second on the team in batting average by hitting .301 in 47 games, all starts... After hitting .158 in 2021, made a significant jump during his sophomore season... Posted a career-high five hits on April 29 at Southern Illinois, the team that eventually finished atop the MVC regular-season standings... Became the first Valpo player with a five-hit effort since Scott Kapers on May 8, 2018 vs. Western Michigan... Accrued 11 doubles, three triples and one home run while driving in 16 runs and scoring 20... Finished with a .357 on-base percentage and .409 slugging percentage.

2021: Appeared in 40 games and made 39 starts… Lashed 19 hits including five doubles and two triples… Posted nine RBIs, 21 walks and 12 runs scored… Had two hits and drove in two in the April 27 game at No. 8 Notre Dame… Posted a season-high three hits including a triple on May 15 in the second game of a doubleheader vs. Evansville… Member of MVC Academic Honor Roll.

Prep (Athletic): Three-year all-conference honoree and one-year academic all-state recipient… Four-year letter winner on the diamond… Also earned four letters in tennis and one in basketball… Played nine years of travel baseball for Northern Stars Baseball, from 9U to 17U.

Personal: Son of Patrick and Michelle Thurston… Is an only child… Majoring in kinesiology with a minor in business administration… Hobbies include hunting and hiking… Favorite food is smoked meat, movie is Moneyball, pro baseball team is the New York Yankees, MLB player is Derek Jeter, musical group is Garth Brooks and TV show is The Mentalist.