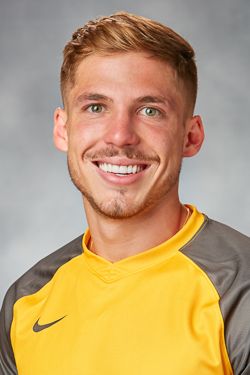 2017: Shared the team lead with nine goals, which ranks tied for seventh in program history for goals in a single season… Totaled 57 shots and placed 25 on goal, both team watermarks… Accumulated 19 points in his first year as a Crusader… Scored a pair of game-winning goals, the only Crusader with multiple match-winners in 2017… Scored his first Valpo goal on Sept. 1 at Loyola, helping the Crusaders win 2-1 in their first Missouri Valley Conference athletic event in any sport since becoming a full-fledged member… Had his only assist of the year on Oct. 21 at Central Arkansas… Picked up his lone brace of the season on Oct. 30 against Eastern Illinois, helping Valpo to a 3-1 win… Beat the entire Drake back line on his own to score an impressive goal in the first round of the MVC Tournament, a play that led off the Scott Van Pelt Sports Center on ESPN that evening.

Bryan College (2015-16): Had 11 goals and three assists for a total of 25 points as a freshman in 2015... Followed by scoring 11 goals with five assists for 27 points in 2016 at NAIA Bryan College in Dayton, Tenn... Earned Appalachian Athletic Conference Golden Boot Award and Freshman of the Year Award in 2015... Named to the all-east region first team and AAC first-team all-conference in 2015 while helping his team become AAC regular season champions... Also earned first-team all-conference honors, all-east region first team and All-American second-team in 2016.

Personal: Started learning English in 2015... Hobbies and interests include movies, the NBA and FIFA... Majoring in economics... Born on May 2, 1996.