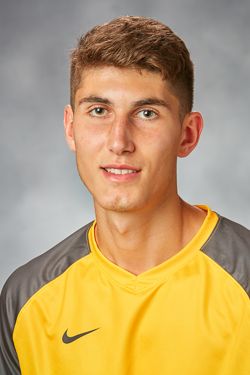 2017: Played in 14 matches and had one assist while registering 17 shots and placing eight on goal… Earned the assist on a Jacob Keck goal in a 3-2 loss to Central Arkansas on Sept. 23… Had a season-high five shots on Oct. 3 at Northern Illinois.

2016: Played in seven matches as a redshirt freshman... Attempted three shots... Made his debut with one minute in the season opener on Aug. 27 at Loyola... Made his Brown Field debut on Oct. 29 against Northern Kentucky... Saw a season-high 17 minutes on Sept. 21 at Ohio State.

Prep: Played one season of high school soccer for the Redhawks … helped team to state runner-up placement in 2012 … played club soccer for Sockers FC … team made academy playoffs in 2015 … member of teams which won the 2012 US Club Soccer national title and the 2010 USL Super Y League, which crowned the North American champion … two-year member of the ODP Region 2 pool and four-year member of the ODP state team.

Personal: Michael is the son of Ron and Caroline Marchionna … major is engineering.