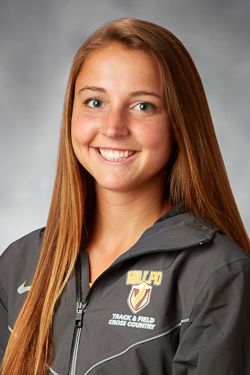 2018 (Cross Country): Featured in each meet for Valparaiso during her junior campaign…Placed third on the team and had her season-best 5K performance at the Missouri Valley Conference Championships, where she crossed the finish line at 20:10.4…Placed fourth in the five other races she competed in, including her top 6K time of 25:33.4 at the Bradley Pink Classic.

2016 (Cross Country): Participated in three meets as a freshman ... earned a mark of 30:33.5 at the Horizon League Championships.

Prep: Three-year letter winner for the Titans…all-conference performer in 2016 and 2015…earned four letters in cross country…helped team to 2015 sectional championship ... team went on to finish in fifth place at state ... Titans won conference, sectional and regional championships in 2014 before finishing sixth at state ... two letters in basketball and one in softball ... academic all-state and all-conference ... member of National Honor Society.

Personal: Daughter of Kathy and Mark Justison ... double major in psych/humanities and pre-med.