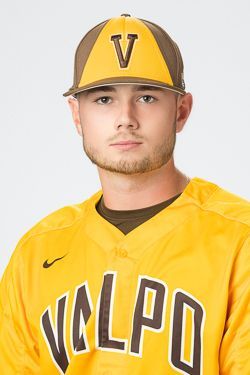 2022: Earned MVC All-Defensive Team status at third base... Led the team in runs scored with 36... Started all 48 games, one of two players on the team to do so... Had the team’s longest hitting streak (11) and on-base streak (16) of the season... Posted a .275 batting average while connecting on 15 doubles, four home runs, 25 RBIs and 36 runs scored... Had a season-high four hits and drove in three on April 10 in Game 1 of a doubleheader vs. Indiana State... Enjoyed 16 multi-hit games and tied for the team lead with seven multiple-RBI games.

2021: Became the first Valpo player to collect MVC Freshman of the Year honors… Also earned a place on the All-MVC Second Team… Received Collegiate Baseball Newspaper Freshman All-American recognition, joining Jon Tieman (2017) and Spencer Mahoney (2012) as the three Valpo players to have earned that accolade… Became the first Valpo freshman to lead the team in batting average since Mahoney in 2012… One of two Valpo players to start all 51 games… Led the team in batting average (.296), hits (55) and on-base percentage (.389)… Scored 22 runs, had six doubles, one triple, three home runs, 72 total bases, eight HBP, 21 walks and four stolen bases… After starting the season with a .200 average over his first 11 games, hit .336 over his last 36 regular-season contests while posting a .434 on-base percentage in that time… Finished the season with a 20-game on-base streak… Earned MVC Player of the Week honors on May 3 after posting a slash line of .556/.636/.667 over five games against Illinois State and Notre Dame. He became the second Valpo position player to earn MVC Player of the Week recognition and first since Sam Shaikin in February 2018… Had a team-high 15 multi-hit games including three three-hit outputs and a season-high four hits in Game 1 of a doubleheader on May 1 vs. Illinois State… Had his first career home run on March 13 at Middle Tennessee. Also homered on April 23 vs. Southern Illinois and May 15 vs. Evansville... Named the Valparaiso University co-Newcomer of the Year as part of the department's annual ARC Awards.

Personal: Majoring in civil engineering… Son of Mitch and Amy Hannahs… Has an older brother, Derek, and an older sister, Kylee… Father Mitch is the head baseball coach at Indiana State University and played three seasons of minor league baseball from 1989-1991 after being selected by the Milwaukee Brewers in the 16th round of the 1989 MLB Draft… Favorite food is steak, movie is Seven Pounds, pro baseball team is the St. Louis Cardinals, MLB player is Fernando Tatis Jr., musical artist is Luke Coombs and TV show is The Office.