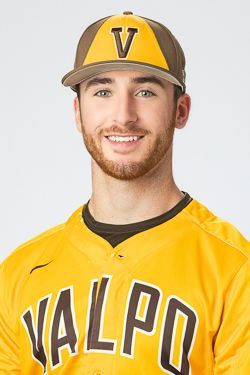 2022: Achieved All-MVC Second Team recognition... Led the MVC in strikeouts with 110 while ranking 15th nationally... Led the conference and ranked second in the nation with 14.08 strikeouts per nine innings... Finished the season fifth in program history with 260 career strikeouts and also ranked fifth on the program’s single-season strikeout list... Had three games with double-figure strikeout totals – at Omaha, vs. St. Bonaventure and at UIC... His 13 strikeouts against UIC marked the most by a Valpo pitcher in a single game since 2011... Finished with a 4-7 record and a 5.38 ERA while making 15 appearances, all starts, and spending the entire conference season as the team’s Friday starter... Logged 73 2/3 innings and held opponents to a .258 batting average against... Threw six scoreless innings on Feb. 19 at Memphis... Allowed just two hits over five shutout frames on March 25 vs. St. Bonaventure... Logged six scoreless innings in a pitchers’ duel on April 9 vs. Indiana State... Earned Valparaiso University Presidential Academic Honors.

2021: Made 13 appearances, all starts… Finished the season with 81 strikeouts, the most by a Valpo pitcher since Dalton Lundeen in 2015… Logged 59 innings over his 13 starts… Allowed one run (none earned) in 4 1/3 innings in his season debut at UAB, garnering eight strikeouts… Pitched the eighth no-hitter in program history in Game 1 of a doubleheader on March 13 at Middle Tennessee, becoming the second individual in the Division-I nation to throw a no-hitter during the season. He racked up 10 strikeouts while issuing four walks in the seven-inning effort, which featured an immaculate inning. The no-hitter was Valpo’s first since 1992… Earned MVC Pitcher of the Week and Collegiate Baseball Newspaper National Player of the Week accolades after the no-no… Held Western Kentucky to two runs in five innings on March 20 before tossing seven shutout innings of two-hit ball with 11 strikeouts and three walks to earn the win on March 27 at Butler. He tied a career high in strikeouts and was named the MVC Pitcher of the Week for the second time due to his effort against the Bulldogs… Had his third double-figure strikeout performance of the season when he fanned 10 Salukis over five innings on April 24 vs. Southern Illinois… Earned Valparaiso University Presidential Academic Honors, MVC Commissioner’s Academic Excellence Award and MVC Honor Roll... Earned the Valparaiso University Male Performance of the Year Award for his no-hitter as part of the department's annual ARC Awards.