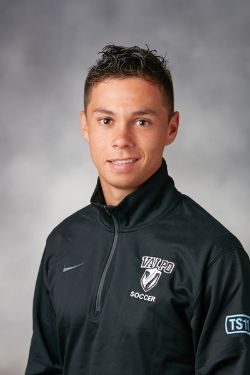 2014: Appeared in all 19 games for the Crusaders as a junior, starting on 17 occasions ... played 1,608 minutes on the season, fifth-most among field players ... scored two goals and tallied an assist for five points on the year ... opened his account as a Crusaders with a goal Sept. 9 at Butler ... also found the back of the net for the match-winner Sept. 26 at Belmont in the Horizon League opener ... registered assist on match-winning goal at Cleveland State in league play Oct. 18 ... recorded 29 shot attempts on the year, putting 11 on frame.

2013: Came off the bench for 16 appearances in the midfield in his first season at Valpo ... saw 491 minutes of action, including a season-high 74 minutes Sept. 6 in Horizon League play at Oakland ... registered first point as a Crusader with an assist Sept. 1 at North Florida on the match-tying goal ... also registered two of his four shot attempts on the year at UNF.

2012 (SMU): Appeared in eight matches for the Conference USA regular season champion Mustangs...scored a goal in a 3-2 overtime victory versus Harvard.

Prep: Helped lead Shattuck St. Mary's to the 2011 Minnesota State Championships while being named Most Valuable Player of his club team.