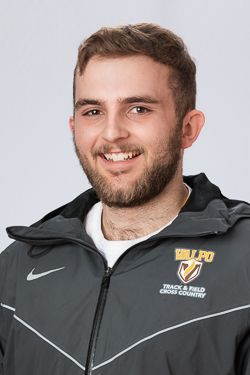 2021: Had his best indoor shot put of the season on Feb. 5 at the GVSU Snowdown Showdown, heaving 42-8.75 (13.02m)… His top indoor weight throw came on Feb. 5 at the GVSU Snowdown Showdown at 50-8.25 (15.45m)… Ranked second on the team in the outdoor discus, topping out at 144-1 (43.91m) at the MVC Championships on May 14… Turned in a 166-8 in the outdoor hammer on April 16 at the Gibson Invitational… Earned MVC Commissioner’s Academic Excellence Award, MVC Academic Honor Roll and Valparaiso University Presidential Academic Honors.

Prep: Was a 2018 all-conference performer in the discus… Earned a pair of letters in both football and track and field… Was a two-year varsity starter on the football team and was named 2017 offensive line player of the year… Named a 2018 Illinois state scholar, a 2018 AP Scholar with distinction, graduated in the top 10 percent of his class and achieved high honor roll all four years.