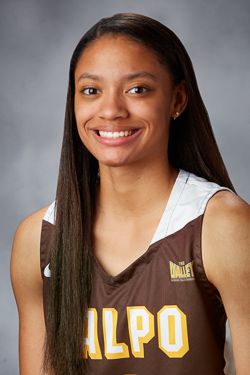 2018-19: Appeared in 31 of the team’s 32 games and averaged 3.0 points and 2.4 rebounds while dishing out 25 assists as a true freshman… Burst onto the scene on Nov. 16 at Morehead State with 10 points on 3-of-3 shooting, her first career double-figure scoring output. Followed that by chipping in seven points on Nov. 17 vs. St. Francis Brooklyn... Matched a career high with 10 points while establishing a personal best with eight rebounds on Dec. 16 vs. North Dakota State... Dished out a career-high six assists while scoring eight points and matching a career best with three steals on Jan. 13 at Drake.

Prep: Four-year letter winner… Averaged 12.5 points, 4.5 assists, 3.9 rebounds and 3.5 steals as a senior… Led her team to a state runner-up finish in 2018… Averaged 8.7 points, 2.9 rebounds, 3.3 assists and 3.1 steals as a junior …. Helped Montini Catholic to a 33-2 overall record as the Broncos finished in third place in the 2017 IHSA 4A state tournament… Team also finished third in the 3A state tournament in 2015… Earned MVP honors at the Chicagoland Invitational Showcase in 2016 after pouring in 20 points in a game… Earned academic all-conference honors all four years and was a four-year honor roll member.

Personal: Majoring in exercise science… Born on Jan. 19, 2000… Daughter of Ivan and Denise Pitts… Has an older sister, Courteney Tillman, and a younger sister, Illyah Pitts.