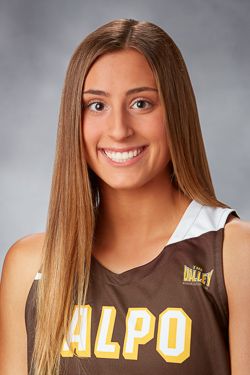 2019-20: Started all 29 games in her first season on the court at Valpo, averaging 30.1 minutes/game ... named to the MVC All-Defensive Team ... averaged 9.9 points, 2.7 rebounds and 2.2 steals/game ... led Valpo and the MVC both in total steals and in steals/game ... raised scoring average to 10.9 points/game in MVC-only play and averaged 2.7 steals/game within conference play ... ranked 66th nationally in steals ... scored in double figures on 10 occasions and tallied at least four steals nine times ... led Valpo in steals 10 times, assists six times, blocked shots five times and scoring on four occasions ... scored 18 points in overtime win over Bowling Green Nov. 24, hitting four 3-pointers ... led Valpo with 20 points in win at Toledo Nov. 27, going 7-of-10 from the floor, including 6-of-8 from 3-point range ... 6-of-8 effort from deep is tied for the sixth-best 3-point percentage in a single game in program history ... scored 11 of her 20 points against the Rockets in the third quarter, helping turn a one-point halftime deficit into a nine-point lead ... named MVC Newcomer of the Week Dec. 2 for her effort against Toledo ... grabbed season-high seven rebounds Dec. 30 in win at Eastern Illinois ... dished out season-high five assists versus #21/19 Missouri State on Jan. 5 ... led Valpo with 19 points, hitting four 3-pointers, and a season-high six steals in Jan. 12 win at Evansville ... named MVC Newcomer of the Week for a second time Jan. 13 for performances in wins at Indiana State and at Evansville ... scored all six of her points in the fourth quarter in come-from-behind win against Loyola Jan. 24 ... led way with 19 points at UNI Feb. 2 ... dropped 15 points in home win over Evansville Feb. 6 ... led way in road victory at Loyola Feb. 22, scoring 17 of her season-high 21 points in the second half ... knocked down a season-best eight free throws and matched season high with six steals as well ... posted 14 points on perfect 6-of-6 shooting from the floor to go with five steals in Feb. 28 win over UNI ... named MVC Newcomer of the Week for a third time March 3.

Prep: Was high school and AAU teammates with Valpo’s Caitlin Morrison… Was named to the Associated Press Class 4A All-State second team as a senior after averaging 21.7 points, 6 rebounds, 2.3 assists and 4.6 steals per game… Finished as the third leading scorer in program history (1,433), was the Central Suburban South Player of the Year and garnered the Pioneer Press Newspaper Girls Basketball Player of the Year honor for 2016-2017… Four-year starter who finished as the school’s all-time leader in steals.

Personal: Daughter of Paul and Heidi Weinman... Has two sisters, Carly and Catie... Born on Nov. 10, 1998... Majoring in psychology... Father played football at Grand Valley State... Was able to share a season of varsity basketball with her sisters Carly and Catie when she was a freshman in high school.