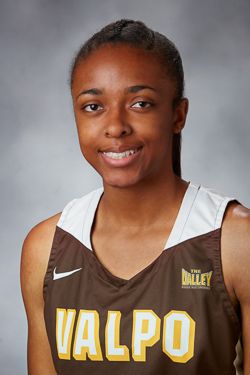 Florida Atlantic: Missed the entirety of the 2018-19 campaign due to injury ... appeared in 17 games as a junior in 2017-18, making a pair of starts while averaging 4.2 points and 2.8 rebounds per game ... scored in double figures twice for the Owls, recording 11 points against Rice and a season-best 15 points in a win over Southern Miss.

State Fair C.C.: An NJCAA Division I Third Team All-American as a sophomore in 2016-17 ... earned First Team All-Region and First Team All-Conference honors as she led the Roadrunners to 19 wins, scoring a team-high 12.4 points per game ... connected at a 50% clip from the 3-point line as a sophomore, ranking second nationally in the category ... as a freshman in 2015-16, averaged 7.7 points and 4.6 rebounds per game for a State Fair squad which won a regional title and advanced to the district championship game.

Prep: Earned All-Conference honors and was named team MVP ... chosen as an All-Star to compete in the Rising Stars Classic.

Personal: Enrolled in sports administration master's program at Valpo after earning bachelor's degree in sociology from FAU ... daughter of Karen and Michael Cowan.