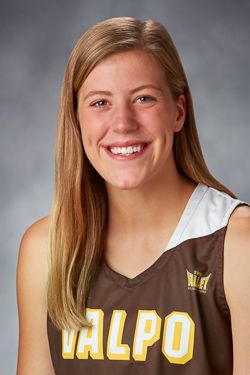 2018-19: Appeared in all 32 games and made 29 starts during her sophomore season… Averaged 6.2 points, 3.4 rebounds and 20.5 minutes per game… Made her first career start in the season opener on Nov. 7 at UIC, going 2-of-3 from the field for five points... Set a season high with eight points and matched a career best with five rebounds on Dec. 8 vs. Miami (Ohio)... Came within one rebound of a career high and set a season best on Dec. 16 vs. North Dakota State, corralling eight caroms. She also chipped in five points... Achieved a career high with 15 points while also blocking two shots on Dec. 19 in a win at Purdue Fort Wayne... Hit double figures for the second time during the season with 10 points on Jan. 13 at Drake. She also led the team in rebounds with five and had a career-high four steals... Equaled a career high with 15 points to go along with a team-best six rebounds on Jan. 18 vs. Indiana State. She also matched a career best with five made field goals in a game and needed just seven shots to do so... Poured in a career-high 16 points on Jan. 20 vs. Evansville... Connected on five triples on Feb. 8 vs. Drake after she had previously made no more than two 3s in a single game in her career. Scored 15 points in that game, one shy of a career watermark.

2017-18: Played in 30 games as a true freshman at Valpo, averaging 3.3 points and 2.8 rebounds per contest… Contributed six points and six rebounds in the first game of her collegiate career, the season opener against IU Kokomo... Knocked down her first career 3-pointer on Dec. 15 against IU Northwest... Reached double figures for the first time in her career by scoring 10 points on Dec. 21 against Fort Wayne... Squeezed what at the time was a season-high seven rebounds on Jan. 7 vs. Bradley, leading the team in that area for the first time in her collegiate career. Played 18 minutes in that game, eclipsing her previous season high of 13... Had five rebounds in only eight minutes on Jan. 19 at Missouri State... Scored a career-high 13 points on 5-of-9 shooting on Jan. 26 vs. Evansville... Had 10 points in just 11 minutes off the bench on Feb. 18 vs. Missouri State... Grabbed seven rebounds on Feb. 23 at Indiana State... Had a career-high nine rebounds to lead the team in that area on Feb. 25 at Evansville.

Prep: Scored 1,000 points early in her senior year... Was a four-year starter and two-year captain for the Warrior girls.... Earned four varsity letters in basketball and track... As a senior, scored 15.4 points per game, averaged 8 rebounds, 2.0 assists and had 40 blocks... Is the 800M recordholder for RLHS and participated in the Wisconsin State Track meet all four years of her high school career.... Also earned varsity letters in golf, academics and music... Was named to the WBCA All-Star game and the Border Battle All-Star Game... Was named to the Big Rivers All-Conference Team all four years.

Personal: Born April 13, 1999 in Rice Lake, Wis... Daughter of John and Holly Ellenson...Brother Wally plays professional basketball - last season he played in the NBL New Zealand for the Jets. He is a three-time All-American in the high jump, where he holds the indoor and outdoor record for Marquette University-7-5.75 (2,28M) is his personal best. He ons Big East Championships indoor and outdoor and finished second at Nationals in Oregon as a freshman and won a Gold Medal at the Pan American games....Brother Ellwood was a three-sport athlete at Valley City State University (ND) and is in his second year of teaching English and coaching cross country and track and field...Brother Henry is a member of the NBA's Brooklyn Nets and was a Marquette standout. He was named The Big East Conference Freshman of the Year before declaring for the draft.