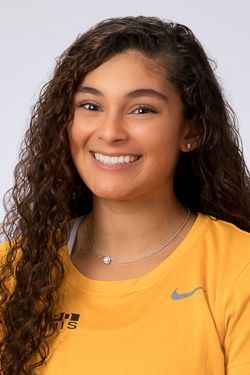 2020-21: Earned the team’s Scholar-Athlete Award… Finished the season with a career singles winning percentage of .500 that ranked tied for 10th in program history… Secured five singles victories and four doubles wins including a 4-5 mark alongside Allison McConnell… Earned wins over Ferris State (Feb. 7) and Bowling Green (Feb. 21) at No. 6 singles before rapping off three victories in a row from Feb. 28 to March 13, besting Wayne State, Northern Illinois and Oakland… Won three straight doubles matches alongside McConnell from Feb. 28 to March 13, beating Wayne State, Northern Illinois and Oakland… Was named MVC Doubles Team of the Week with McConnell on March 17 after a victory over Oakland… Earned MVC Commissioner’s Academic Excellence Award, MVC Academic Honor Roll and Valparaiso University Presidential Academic Honors.

2019-20: Recorded an 11-9 singles record and 11-8 doubles mark during her maiden collegiate voyage… Through one season, has a career doubles winning percentage of .579 that ranks third in program history and a singles winning percentage of .550 that ranks 11th… Won her first four singles matches during the fall including three that allowed her to win the Flight 3 Singles championship at the DePauw Invitational in September… Won nine singles matches during the fall season including one in the MVC Individual Championships… Beat UIC’s Karyna Bihel 3-6, 6-1, 10-7 on Sept. 21 at the UIC Fall Invitational, a victory that came against a second-team all-Horizon League performer from the previous season... Nearly recorded a “double bagel” in the opening match of the spring season, downing her IUPUI opponent 6-1, 6-0 to help Valpo top the Jaguars on Jan. 18… Earned a three-set win on Feb. 16 against Eastern Illinois to help the team best the Panthers… Started the fall with seven consecutive doubles wins – four with Dao Sysouvanh and three with Olivia Czerwonka – and totaled 10 doubles victories during the fall slate… Teamed up with Olivia for a win at No. 2 doubles in the spring opener against IUPUI.

Prep: Team won conference all four years of her high school career while she earned first-team all-conference accolades in each of the four seasons… Was a four-time District qualifier, two-time state qualifier and placed fourth in the state doubles tournament in 2017… Was a member of the high honor roll, National Honor Society and received Spanish national honors.