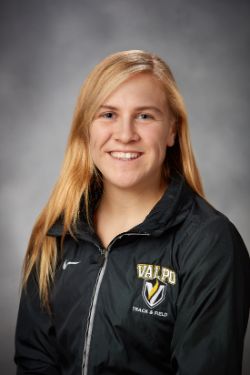 2014 (Cross Country): Ran in all six races for Valpo in her sophomore season...earned First Team All-League honors alongside teammate Jessica Richardson...notched a top-10 finish in the Crusader Open 4K with a time of 13:54.8, good for 8th place overall...covered the Western Invitaitonal 5K course in 19:21, second-fastest on the team...recorded an 18:18.7 result at the Notre Dame Invitational 5K...ran a 22:25.3 6K at the Bradley Invite...cracked the top-5 at the HL Championships 6K en route to the aforementioned All-League honors following her 21:57 time...closed out the season with a 22:24 result at the NCAA Great Lakes Regional 6K.

Prep: Four-time first-team all-conference winner for the Irish...third place at 2012 state championships...2012 conference and sectional championship...holds 4K and 1600m record for her school...also lettered in basketball and track...member of the National Honor Society.

Personal: Daughter of Susan and Joel Powers...major is theology and ministry ... married former Crusader track and field athlete Elijah Owen in the summer of 2016.