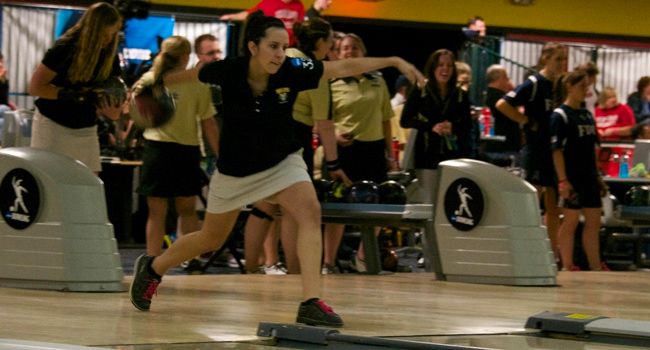 Valparaiso started its quest for a national championship Thursday at Freeway Lanes in Wickliffe, Ohio, going 2-2 over the morning session’s four matches before dropping all three matches in the afternoon session to end the first day of competition at the 2012 NCAA Bowling Championship with a 2-5 record and the eighth seed to begin Friday’s bracket play.  Senior Natalie Cortese (Hoffman Estates, Ill./Hoffman Estates [Central Missouri]) led the entire tournament field in average on Thursday, posting an average of 218.4 over the seven matches.

"Natalie’s a competitor; she goes out and wants to win, and every shot she threw today was to win,” said Crusader head coach Matt Nantais.  “She cruised along pretty good in the morning session.  Then in the afternoon, she was dealing with a migraine, but still went out and performed at a higher level than anyone else in the tournament.  Sshe only had a couple of open frames today, one of which came off a split.  For the most part, she threw the ball great all day.”

The Crusaders’ 2-5 record left them in eighth place out of the eight competing teams for seeding heading into Friday, as the seeds were determined by win-loss record.  Valpo did tally 6,760 pins over the seven matches, which ranked fifth out of the eight teams.  With the eighth seed, Valpo begins bracket play on Friday against top-seeded Vanderbilt.

Valpo opened tournament play against Central Missouri on Thursday, and despite matching its tenth-best single-match total in traditional action in program history against the Jennies, the Crusaders suffered a 1066-1031 loss in the opener in a match which came down to the final frame.  Cortese paced the Crusaders in the opening match with a 237, while senior Krystyna Johnson (Montgomery, Ill./Oswego East [Delaware State]) rolled a 229 and redshirt freshman Alyssa Alvarez (Antioch, Ill./Antioch) posted a 225, her second-best effort of the season.  Senior Jessica Guertin (Milford, Mich./Milford [Fairleigh Dickinson]) made just her second start of the season against UCM as well, rolling a 196.

The Crusaders looked poised to get their first win against Nebraska in the day’s second match, but the Cornhuskers went on a streak of 14 consecutive strikes over the ninth and tenth frames to edge Valpo by a 1018-981 count.  Johnson led the Crusaders against Nebraska with a 215 game, while Cortese registered a 214.

Valpo secured its first win at the NCAA Championship in program history in the third match on Thursday, cruising by Sacred Heart by a score of 1014-916.  Senior Amanda Cortese (Hoffman Estates, Ill./Hoffman Estates [Central Missouri]) led the Crusaders in the winning effort with a score of 224, to go along with a 212 game from sophomore Kaity Galka (Dyer, Ind./Lake Central) and a 211 game by Natalie Cortese.

The final match of the morning session saw the Crusaders improve their record to .500 on the day, as Natalie Cortese struck on her first ball of the 10th frame as Valpo’s anchor to secure an 897-880 win over Arkansas State.  She led the way for Valpo in that victory with a 233, the only Crusader to break 200 against the Red Wolves.

“I felt good,” said Nantais regarding his mindset following the morning session.  “The girls were throwing the ball well.  We were in every match making our spares and were bowling well with a lot of energy.  They were definitely confident coming into this morning.”

After the break for lunch and for the lanes to be re-oiled, Valpo returned to action in the afternoon session against Maryland Eastern Shore, but again came up short in a close loss, suffering a 1014-987 defeat.  Natalie Cortese rolled Valpo’s best game of the day, posting a score of 259 against the defending national champions, and Alvarez surpassed 200 for the second time on Thursday with a 203.

The Crusaders took on Fairleigh Dickinson next, but failed to convert a number of single-pin spares and left too many open frames late in the match as they fell 948-868 against the Knights, with redshirt junior Ashley Busiel’s (Elk Grove Village, Ill./James B. Conant [Harper College]) 207 accounting for Valpo’s only 200+ game versus FDU.  Valpo then concluded the day by taking on Vanderbilt in a match that saw the Crusaders mark consistently but fail to string together strikes.  The Crusaders were still within striking distance entering the 10th frame, but consecutive opens to start the decisive frame doomed Valpo to a 1020-982 defeat to end the day.  Galka rolled a team-best 231 in the finale, while Natalie Cortese recorded her sixth 200 game of the day with a 204.

“The lanes tightened up a little bit in the afternoon, but I think our bowlers overthought a lot of shots and just didn't make good shots,” said Nantais regarding the afternoon session.  “It was almost like they lost focus on what they were doing.  We would go up and throw two strikes, and then totally miss the head pin.  That’s just a lack of concentration, and that’s something that can't happen tomorrow or we'll be going home.”

Valparaiso (83-42) begins the best-of-seven baker double elimination bracket on Friday morning at approximately 8:45 a.m. CDT against top-seeded Vanderbilt.  Live video can be found through www.valpoathletics.com, which will also have a live interactive chat for the duration of the Crusaders’ matches.

“Everybody's coming in on the same level tomorrow,” said Nantais.  “We bowl very well in baker games and have always bowled better on the second day of a competition, so for us coming in, I think that we have a really good chance of winning those matches no matter who we bowl.  We’ll definitely look to see who among our bowlers has the best shot in the morning, because we’ll need whoever's got the best look coming in to be throwing for us tomorrow.”