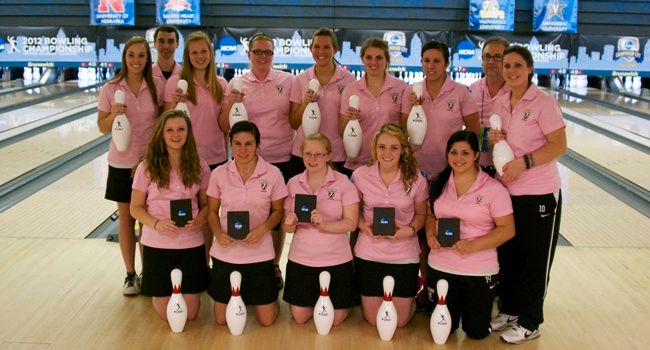 The Crusaders with their team awards after ending the NCAA Championship among the final six. (Jeff Lange)
Related Links

Valparaiso stayed alive in an elimination match at the 2012 NCAA Championship at Freeway Lanes in Wickliffe, Ohio Friday morning by defeating Sacred Heart, 4-2, but the Crusaders would eventually fall to Nebraska 4-3 in another elimination match Friday afternoon to end their hopes of capturing the national title.

“We started out a little slow today against Vandy,” said Crusader head coach Matt Nantais. “I feel we had chances in all the games we bowled against them, but gave them a lot with our mistakes.  We came back the next match and bowled very well against Sacred Heart, where every game pretty much went down to the tenth frame.  We felt pretty good going into the final match against Nebraska, but in the end it was just lane choice that got us.  We made some great adjustments on the right-hand lane in the last game, but it wasn't quite enough.”

“We're the first seniors to graduate from the program after starting here three years ago, and I think it's a big deal for us to be sitting here today,” said Natalie Cortese.  “All of us started at other schools and transferred in, but we came together, lived together and bowled together.  Our goal was always to get here, to the NCAA Championship.”

“We were all opponents our freshman year, bowling against each other at the championship,” said Amanda Cortese.  “So we all knew what we were getting into by coming to the tournament.  I think it was definitely better this time bowling together as a team - to come this far after starting a program, have one goal and finally make it.”

The match against the Cornhuskers Friday afternoon started with Valpo on the left-hand lane, and it looked for a while like the Crusaders might go down 1-0 in the best-of-seven baker format.  Down 26 after an open in the seventh frame of game one, redshirt freshman Alyssa Alvarez (Antioch, Ill./Antioch) struck in the eighth and Johnson struck in the ninth to keep Valpo alive.  When Nebraska left an open on a split in the ninth, the door was open for Valpo, and Natalie Cortese made sure to give the Crusaders the lead, striking out to give Valpo a 219-213 win in the opener.

Game two was not as pretty on either side, as both teams left plenty of opens with numerous splits.  The two sides were tied into the ninth frame, but Nebraska struck in the ninth and Valpo could only manage a nine-spare, which proved to be the difference in a 178-168 Cornhusker win.  The Crusaders bounced back on the left lane in game three, however, completely dominating Nebraska in a 279-157 victory to go up two games to one.  The only blemish on Valpo’s scorecard in the 279 effort was a single nine-spare in the sixth frame to go with 11 strikes.

Again, the left lane held the victor in game four, as Nebraska started the game with four straight strikes to take the lead for good, while the Crusaders struggled, leaving three splits in a 197-169 loss.  Valpo again rebounded on the return to the left lane, though, registering eight strikes and three spares in a 245-189 win in game five to go up 3-2 and move one game away from advancing.  Nebraska dominated game six, however, as the Crusaders again struggled on the right lane in a 264-154 loss.

With the left lane having held the victor in each of the first six games in the best-of-seven match, Nebraska as the higher seed got lane selection for the decisive seventh game and made the obvious choice of the left-hand lane.  Despite being on the lane which had thwarted them throughout the match, however, the Crusaders hung around, picking up marks to stay somewhat within striking distance.

Nebraska struck four in a row from frames two to five to claim the lead, and looked like it would be able to secure the win by just marking all the way in.  An open frame by the Cornhuskers in the ninth left the door open if Valpo could strike in the ninth frame and close out with three strikes in the tenth.  But the Crusaders managed just a nine-spare in the ninth and Nebraska’s anchor struck on her first ball of the tenth to secure the result, as Valpo eventually fell, 226-195.

Valpo had advanced to the afternoon showdown against Nebraska after downing fourth-seeded Sacred Heart in an elimination match to close out the morning session, four games to two.  The Crusaders won the opener against the Pioneers, 188-162, thanks to three consecutive strikes in frames seven through nine from sophomore Kaity Galka (Dyer, Ind./Lake Central), Alvarez and Johnson while SHU left two open frames.

Sacred Heart countered with a 197-178 win in the second game, a game in which it marked the first eight frames while the Crusaders left opens three times in the first seven.  The third game was close halfway through, with Valpo ahead just two pins through five frames, but consecutive strikes by Amanda Cortese, Galka and Alvarez gave the Crusaders breathing room in an eventual 202-153 win.

It looked like Valpo would go up three games to one in the fourth contest, as a mark in the tenth would have closed out the Pioneers.  But the first shot was a 6-7-10 split and the second shot missed everything, leaving a window for SHU.  It took full advantage, with a strike in the ninth and two strikes and a nine in the tenth frame finishing a come-from-behind 202-201 victory for the Pioneers, evening the match up at two games apiece.

The Crusaders wouldn’t let the narrow defeat in the fourth game get them down, however, putting together five consecutive strikes in the second half of game five to earn a 222-197 win and move within one victory of staving alive.  Valpo trailed heading into the late frames of game six, but a strike from Alvarez and a nine-spare by Johnson set up Natalie Cortese, who posted two strikes and an eight to give the Crusaders a 201-190 comeback win and end the match in Valpo’s favor.

The eighth-seeded Crusaders found themselves in an elimination match in just the second match of the day after dropping the opening contest to top-seeded Vanderbilt, four games to one.  Two opens in the first five frames of the first game gave the Commodores the lead for good in a 176-164 opener, but Valpo came back in the second game with a 219-195 victory, using a four-bagger from Galka, Alvarez, Johnson and Natalie Cortese to take control halfway through.

Vanderbilt took control of game three in the second half, going strike-strike-nine spare-strike in frames six through nine to claim a sizable lead after Valpo opened in the seventh.  A Vandy split in the tenth frame left the door open for the Crusaders, however, but needing to strike the second ball of the frame, Valpo left a 10-pin as the Commodores took a narrow 176-171 win.

The fourth game was never in doubt, as Valpo left opens twice in the first three frames while Vanderbilt was consistent throughout with eight strikes and three spares in winning 247-157.  Needing a win to stay alive in game five, the Crusaders got out to a good start, going up 18 pins through five frames.  But the Commodores posted two strikes, a nine-spare and a strike over their next four frames to keep the pressure on Valpo, and the Crusaders were unable to pick up a 3-10 split in the ninth as Vandy eventually ended the match with a 206-192 decision.

Valparaiso (84-44) outlasted a pair of teams on Friday, as both Central Missouri and Sacred Heart suffered two losses in their opening two matches.  The Crusaders matched the effort of Arkansas State by winning one before losing twice, while Vanderbilt, Nebraska, Fairleigh Dickinson and Maryland Eastern Shore are left to vie for the national championship.