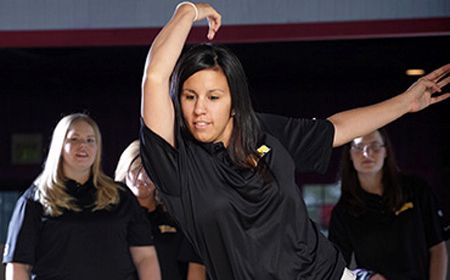 The #11 Valparaiso bowling team used a 5-1 day on Saturday at the Kutztown Invitational in Reading, Pa. to end the first day of tournament competition in sixth place.  Natalie Cortese (Hoffman Estates, Ill./Hoffman Estates [Central Missouri]) tied for the tournament’s best average on the day, averaging a 220.7 over the Crusaders’ six matches.

Valpo totaled 5,738 pins on the first official day of action to finish the day in sixth place out of the 28 competing squads.  The Crusaders sit just 41 pins outside of the top-five heading into Sunday.

“Today was a solid performance for our team,” said Crusader head coach Stephen Anthony.  “We were able to go 5-1 and post five out of six games above 900.  We got contributions from everyone throughout the day and did a nice job of working together and put ourselves in a good position for the third day.  With two more matches prior to the bracket round tomorrow, we have another opportunity to challenge for one of the top spots in the tournament.”

The day started off on the wrong foot for the Crusaders, as #5 Central Missouri defeated Valpo in the day’s opening match, 1053-904, despite a 214 from Ashley Busiel (Elk Grove Village, Ill./James B. Conant [Harper College]).  Valpo bounced back in its next match, trouncing Howard 1041-805 thanks to a Crusader day-high 278 by Cortese and a 225 from Busiel.

The Crusaders then defeated the team immediately ahead of them in the national polls, beating #10 St. Francis (N.Y.) 1028-979 thanks to three 200+ games, led by a 238 by Krystyna Johnson (Montgomery, Ill./Oswego East [Delaware State]).  Cortese and Nicole Hamilton (Plainfield, Ill./Plainfield) each posted 209s in the next match as Valpo rolled to a 959-797 victory over Bethune-Cookman.

Cortese continued her string of 200+ games in the day’s final two matches, posting a 223 against Medaille and a 218 versus North Carolina Central as she closed the day with five straight games of 200 or better.  Cortese’s performances helped pace Valpo to victories in both outings, as the Crusaders downed Medaille, 911-849, and NCCU, 895-757, to close the day with five straight wins.

Valparaiso (43-29) closes out action at the Kutztown Invitational on Sunday morning beginning at 7:30 a.m. CST.