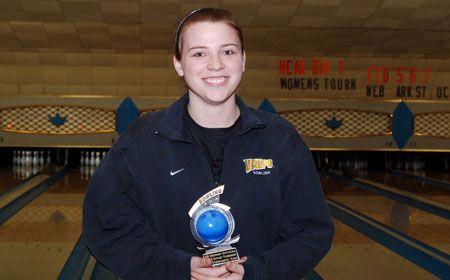 #11 Valparaiso went a perfect 4-0 in action Sunday on the final day of competition at the Shrewsbury Invitational in St. Louis, Mo., leapfrogging into third place in the final standings.  Freshman Nicole Hamilton (Plainfield, Ill./Plainfield South) was named to the All-Tournament Team after posting a 192.7 average, good for fourth among all tournament bowlers.

The Crusaders’ 4-0 record on Sunday gave them an 8-6 record over the three days of tournament action, tying them with #5 Central Missouri for third place out of the eight competing teams, seven of which are ranked in the nation’s top-15.  Valpo earned the tiebreaker over the Jennies based on total pinfall, in which the Crusaders held a 12,659-12,383 advantage.  #8 Nebraska took the team title with an 11-3 mark.

“I was very pleased with how we competed today,” said Crusader head coach Stephen Anthony.  “As a team, we were focused and got key contributions from everyone.  To post four victories today against such a strong field was a solid accomplishment.”

Valpo defeated Central Missouri to open play on Sunday, 876-825, paced by a 206 game by Amanda Cortese (Hoffman Estates, Ill./Hoffman Estates [Central Missouri]).  The Crusaders got a 238 from Hamilton and a 208 from Cortese in their next game to easily defeat Elmhurst, 988-836.

Hamilton broke 200 for the second straight game, rolling a 204 to lead Valpo as it downed #14 UW-Whitewater, 894-868.  The Crusaders then closed tournament action with a fourth straight victory, beating #14 Louisiana Tech 875-801, led by a 202 from Natalie Cortese (Hoffman Estates, Ill./Hoffman Estates [Central Missouri]).

“I was pleased with how we bounced back from some tough results yesterday to move into the third spot for the tournament,” said Anthony.  “We continue to prove that we can compete for all three days and finish strong.”

Valparaiso (54-36) returns to the lanes next Saturday at the Warhawk Classic in Whitewater, Wis.  The two-day tournament starts on the 13th at 12:35 p.m.