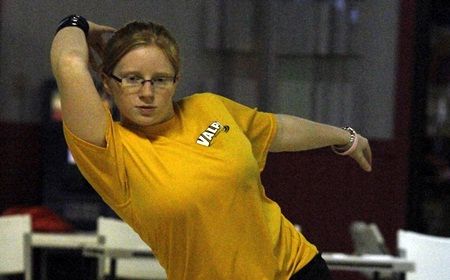 #13 Valparaiso split its eight matches over the last two days of the Mid-Winter Classic in Cabot, Ark., finishing the tournament in eighth place.

The Crusaders posted a 3-2 mark in Saturday’s action, contested in the traditional team format.  Junior Krystyna Johnson (Montgomery, Ill./Oswego East [Delaware State]) led the way with a 186.6 average on Saturday, including a high game of 206, while junior Natalie Cortese (Hoffman Estates, Ill./Hoffman Estates [Central Missouri]) posted two 200s en route to a 182.6 average over the five games.  Sophomore Morgan Sharp (Worth, Ill./Lockport Township) rolled Valpo’s high game of the day, a 213, and also posted a 204 in Saturday’s action.

“We had a good win over Stephen F. Austin, who has had our number recently,” said Crusader head coach Shon Washington.  “Freshmen Kaity Galka and Jill Larson showed a lot of resolve on a challenging oil pattern [Saturday].  Both players have not had a tremendous amount of experience at this level and struggled at times.  However, I am very proud of the way they carried themselves on and off the lanes this weekend.”

Valparaiso’s total pinfall of 8,628 through the first two days of competition was good for the eighth seed heading into Sunday’s best-of-seven baker format bracket competition, where the Crusaders first met seventh-seeded #5 Stephen F. Austin.  The Crusaders won the first three games, including a 218 in game two and a narrow one-pin victory in game three, to take control of the match.  Stephen F. Austin won the next two games, but Valpo earned the 4-2 victory with a 167-159 win in game six.

With the win, the Crusaders advanced to take on fifth-seeded #14 Alabama A&M and got out to a 3-2 lead thanks to games of 200, 194 and 201 in games two, four and five, respectively.  But Alabama A&M won the final two games, 158-146 and 190-177, to take the 4-3 match victory.  The seventh-place match featured a re-match against Stephen F. Austin, but this time the Crusaders could never gain the lead in the match, eventually succumbing 4-2-1.

Valparaiso (34-26) returns to the lanes on Thursday at the Big Red Invitational, hosted by Nebraska.  Action on the first of three days of competition is slated for a 6 p.m. start.