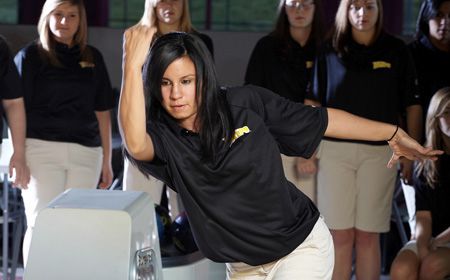 #13 Valparaiso won two of its three bracket-round matches on Sunday at the Kutztown Invitational in Reading, Pa., closing the three-day tournament in 11th place out of 28 competing teams.

Junior Natalie Cortese (Hoffman Estates, Ill./Hoffman Estates) earned All-Tournament Team accolades after posting a 218.9 average during Saturday's traditional matches, tied for the second-highest average in the field.  Cortese broke 200 in four of her six games Saturday, including three efforts of 235 or better.

Sunday's bracket play, contested in the best-of-seven baker format, opened with the Crusaders taking on #11 St. Francis (N.Y.) in a match that went down to the wire before Valpo earned the 4-3 victory.  Valpo's second match also went the distance, but the Crusaders came out on the short end of a 4-3 loss to #RV UW-Whitewater.  But the tournament ended on a high note for the Crusaders, as they earned a 4-1 victory in the 11th-place match over St. Peter's.

Valparaiso (48-37) now has over a month off before its next competition, scheduled for March 11-13 at the Music City Classic in Nashville, Tenn.