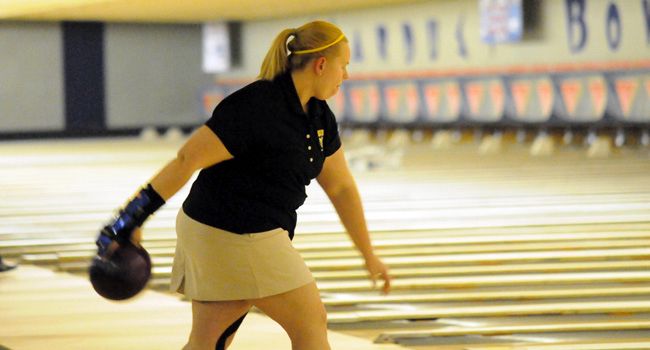 Hosting the third annual Crusader Classic at Stardust Bowl II in Merrillville, the #18 Valparaiso bowling team ended the first day of competition with a 3-2 record and in third place in the nine-team tournament field.

The Crusaders ended the first day, which consisted of five five-game baker matches, with 4,667 total pins for their third-place standing.  #6 Arkansas State sits atop the leaderboard with 4,834 total pins, while #5 Nebraska is just behind at 4,817 total pins and was the only team to go undefeated in Friday’s action.

Valpo opened tournament action on Friday against #20 Prairie View A&M and looked poised for an opening victory, as back-to-back games of 214 and 211 midway through the match helped the Crusaders to a 55-pin advantage with just one game remaining.  But Valpo fell 188-128 in the finale, suffering a heartbreaking 887-882 loss in the opener.  The Crusaders rebounded in their second match, utilizing their best game of the day, a 236, to down #14 Alabama A&M by a 956-887 count.

A buzzsaw in the form of #17 UW-Whitewater awaited Valpo in the day’s third match, as the Crusaders fell 1005-896.  But the Crusaders closed the opening day strong, rolling five games of 200 or better over the final two matches as Valpo claimed a 944-670 victory over Elmhurst and a 989-759 win against Alabama State.