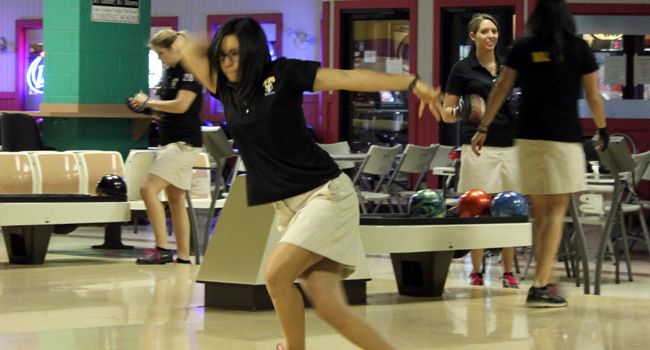 #2 Valparaiso split a pair of matches in bracket play Sunday at the Holiday Classic in Bessemer, Ala., finishing the tournament in fifth place.  Senior Amanda Cortese (Hoffman Estates, Ill./Hoffman Estates) was one of five bowlers named to the All-Tournament Team.

Valpo’s first match of the day came against #7 Vanderbilt, with a berth in the championship match on the line.  The Crusaders took the opener in the best-of-seven baker action, 228-193, but would end up falling by a 4-1 score to the Commodores, as Vandy rolled three games of 214 or better to close out the match.

With the loss, the Crusaders fell to the fifth-place match against Southern, where they took no time in capturing a 4-0 sweep.  Valpo opened the match with a 199 to go up 1-0, and edged out Southern in the second game, 168-167.  A 174 in game three was enough to move within one game of the sweep, and the Crusaders closed out the tournament on a high note with a final game of 204.

“As a whole, I think we came out and communicated well this weekend and that we were more consistent than we have been in the past,” said Cortese.  “We still have some areas we need to work on before Nashville.  There was a lot of positivity this week, which was definitely helpful during the competition and helped us be successful.  Unfortunately today, we just couldn’t make shots in our first match.  We didn't throw every ball with conviction, and that’s why we lost, because Vanderbilt did.  We just need to regain focus and maintain our confidence throughout the entire tournament.”

Valparaiso (65-25) returns to action in three weekends for its final regular season match of the year, heading to Nashville, Tenn. to compete in the Columbia 300 Music City Classic, hosted by Vanderbilt.