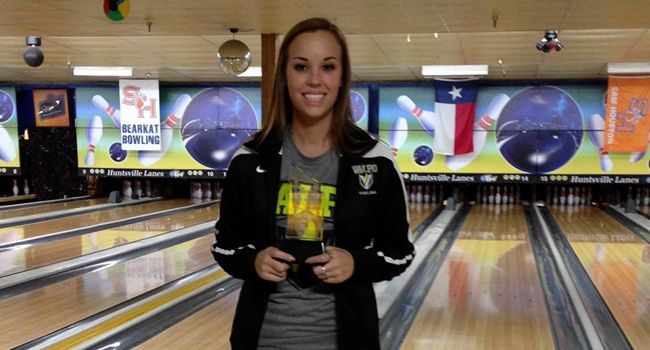 Alyssa Alvarez was named to the All-Tournament Team.
Related Links

Valpo opened play on Sunday, contested in the best-of-seven baker format, against host #8 Sam Houston State, and but for a pair of narrow losses, could have come out with a 4-0 sweep.  But the Crusaders fell by two pins in the second game and eight pins in game four, as the match was tied at two games apiece.  A 266 from Sam Houston State put the Crusaders down 3-2 after five games, and while Valpo won game six 214-174 to send the match to a decisive seventh game, the host Bearkats rolled a 252 in the finale to claim the 4-3 win.

The Crusaders opened their second match of the day with a 254 game to claim the early lead against Long Island, but wouldn’t break 200 the rest of the match, while LIU posted games of 200+ in four of the five games to earn a 4-1 win.  Valpo closed the tournament on a high note, trading wins and losses with Louisiana Tech in its finale before taking home the 4-3 win with a 192-172 victory in game seven.

Valparaiso (20-27) now takes a break for the holidays before returning to the lanes at the Mid-Winter Invitational in Jonesboro, Ark.  Action starts at the three-day event on Friday, Jan. 11.