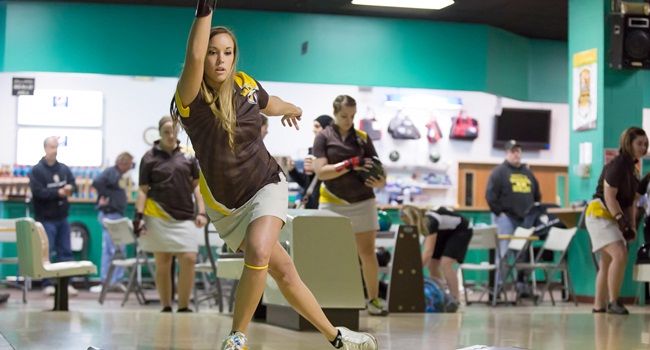 Alyssa Alvarez averaged better than 200 per game for Valpo on Friday.
Related Links

#14 Valparaiso earned its eighth win all-time over the nation's top-ranked team as it continued play Friday at the Big Red Invitational in Lincoln, Neb.

The Crusaders closed the day in sixth place out of the eight competing teams, just 14 pins out of fifth position. Arkansas State leads the team standings by a single pin over Central Missouri.

Valpo opened play on Friday, contested in the traditional team format, against #6 Sam Houston State, but despite games of 211 from redshirt junior Alyssa Alvarez (Antioch, Ill./Antioch) and 200 by sophomore Raychel Wolever (Charlotte, Mich./Charlotte), the Crusaders fell 931-900. Then, in their second match, the Crusaders dropped a 1062-989 decision to McKendree, although Wolever, freshman Carly Larson (Merrillville, Ind./Merrillville) and senior Torrie Decker (Van Wert, Ohio/Van Wert [Robert Morris (Ill.)]) all broke 200 with respective efforts of 233, 211 and 206.

No Crusader shot better than 190 in the third match of the day, as Valpo remained unable to notch a win, falling 932-870 to #8 UW-Whitewater. That would change in the next match, as facing host #1 Nebraska, the Crusaders edged out a 973-964 victory, led by their best single game of the day, a 254 effort from Alvarez. The win was the eighth in program history over the nation's top-ranked team in their fifth season of competition.

Valpo made it back-to-back wins with a 940-861 victory over Elmhurst in the day's penultimate match, led by a 209 from Larson. Then, in the day's final match, Wolever rolled a 222, senior Jill Larson (Merrillville, Ind./Merrillville) a 214 and Alvarez a 213, but it was not enough to end the day on three straight wins, as #3 Central Missouri earned a 1034-963 win.

Alvarez ended the day with a 203.8 average in her six games, while Wolever posted a 195.7 average. Valparaiso (17-21) closes out action at the Big Red Invitational on Saturday.