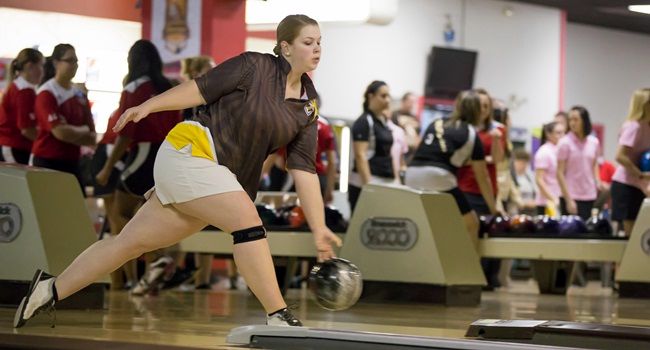 The Crusaders finished in eighth place in the 12-team field. Nebraska captured the team championship, while McKendree's Jodi Gawlik was the individual champion.

Three of Valpo's five bowlers broke 200 in the opener on Saturday, with matches being contested in the traditional format, as the Crusaders faced host #5 Central Missouri. Freshman Savannah Carr (Buckeye, Ariz./Younger) led the way with a 213, while senior Torrie Decker (Van Wert, Ohio/Van Wert [Robert Morris]) rolled a 208 and freshman Carly Larson (Merrillville, Ind./Merrillville) posted a 205, but it was not enough, as the Crusaders fell by a 1038-990 final.

Decker made it back-to-back games of at least 200 by rolling a 205 in the Crusaders' second match, but she was the only Valpo bowler above 200 as it fell to #1 Arkansas State 1039-954. Larson then delivered Valpo's single-best game of the day in the next match, tallying a 227 in a 1000-921 loss to #2 Nebraska. Freshman Alyssa Meade (Chesterfield, Mich./L'Anse Creuse North), starting just the fourth traditional match of her career, registered a 210 in the next contest, a 957-922 loss to #7 Sam Houston State, while the Crusaders concluded the tournament with a 882-863 loss to Louisiana Tech.

Valparaiso (52-56) travels next weekend to the Columbia 300 Music City Classic, hosted by Vanderbilt in Nashville, Tenn.