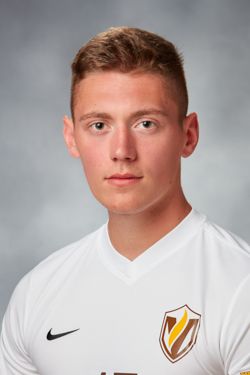 2018: Played in all 17 games and made nine starts while turning in one goal and one assist to go along with 10 shots, two on goal… Enters his junior season with four career goals… Provided an assist on a Danny Moreno goal on Aug. 26 at Marquette… Drove one from the corner of the box into the lower left to tie the Sept. 25 game vs. SIU Edwardsville at two, an eventual 3-2 defeat to the Cougars.

2017: Appeared in all 18 matches and made 14 starts during his rookie campaign, finishing with three goals and three assists to total nine points… Notched his first career assist on Aug. 28 at Michigan… Scored his first career goal on Sept. 16 at Drake, a golden goal to lift Valpo to a 3-2 win after trailing 2-0 at the half… Also scored goals on Oct. 3 at Northern Illinois and Oct. 12 at Western Illinois, when he had a season-high three points… Became the first Valpo freshman with three goals since 2014 and finished with the most points of any Crusader rookie since 2012.

Personal: Son of Frank and Nicole Engler... Has one sister, Lilian... Hobbies include meeting friends and playing PS4... Born on May 14, 1998... Majoring in international business... Is a huge basketball fan... Favorite food is schnitzel with spatzle.