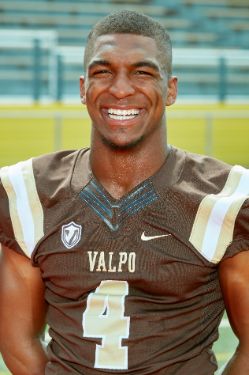 2016: Suffered a season-ending knee injury in the first game of his senior season on Sept. 3 at Illinois State... After the season, received an extra season of elgibility and the ability to return as a redshirt senior in 2017.

2015: Ranked as one of the Crusaders' top defensive players ... an Honorable Mention All-PFL honoree at defensive back ... finished second on the team with 76 tackles, including 48 solo stops ... tied for second among Valpo players with five pass breakups and ranked third with 4.5 tackles for loss ... forced two fumbles, recovered a fumble and intercepted a pass as well ... tallied season-high 10 tackles in back-to-back games Sept. 12 against Sacred Heart and Sept. 26 versus San Diego ... also forced a pair of fumbles and recovered a fumble versus Sacred Heart ... registered exactly nine tackles in three consecutive games - Oct. 10 at Drake, Oct. 17 against Dayton (eight solo) and Oct. 24 versus Stetson ... recorded an interception against Drake ... broke up two passes and totaled seven tackles Nov. 14 against Morehead State.

2014: Appeared in all 12 games for the Brown and Gold...experienced one of the biggest breakout seasons of any Crusader...accumulated 85 tackles, a forced fumble, and five pass breakups on the season...logged seven tackles - three solo - in his collegiate debut at Western Illinois on Aug. 28...recorded his first of three double-digit tackle games in Valpo's home opener versus St. Joseph's (Sept. 6), amassing 10 stops...broke up a pass attempt and registered a six-yard TFL in the Crusaders' 39-30 win over William Jewell (Sept. 20)...racked up four solo stops at Campbell (Sept. 27)...forced a fumble and registered five tackles versus Marist (Oct. 4)...accounted for three tackles versus Missouri Baptist (Oct. 11) in the Brown and Gold's 55-7 win over the Spartans on Homecoming...made eight tackles - five solo - against Drake on Oct. 18th...accumulated a season-high 15 tackles - nine solo - and a pass breakup at Morehead State (Oct. 25)...notched seven stops at Dayton (Nov. 1)...recorded 10 tackles - seven solo - versus Butler (Nov. 8) in the Crusaders' 17-3 victory over the Bulldogs...posted seven tackles at San Diego (Nov. 15)...broke up a pass and delivered four stops in Valpo's 27-13 triumph over Davidson in the season finale...finished the season 171st in FCS football in tackles per game (7.1)...received an All-PFL Honorable Mention nod.

Personal: J.J. is the son of John and Monique Nunes... He and his wife Sarah have one son, J.T... Majoring in philosophy of sport.