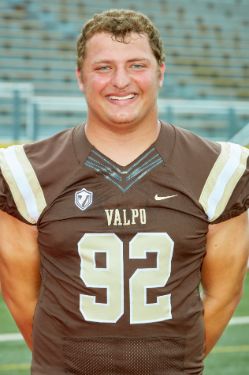 2019: Appeared in all 12 games and totaled 21 tackles (four solos) plus four QB hurries and one blocked kick… Had a season-high five tackles on Sept. 21 at Truman State… Blocked a PAT on Nov. 23 vs. Marist… Member of PFL Honor Roll.

2017: Played in 11 games and made three starts… Had nine tackles and 0.5 TFL for the season… Made his collegiate debut on Sept. 2 at Montana and his first career start on Sept. 16 at Trinity International… Forced a fumble and blocked a kick in Valpo’s homecoming victory over Stetson on Sept. 30 while also earning a ½ tackle for loss in that game.