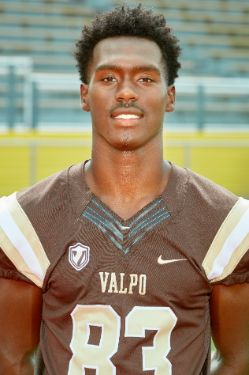 2017: Played in eight games in his first season at Valpo… Made his collegiate debut on Sept. 16 at Trinity International… Finished the season with 14 tackles, eight solos… Had two pass breakups… Had his first career tackle on Oct. 7 at Campbell… Racked up a season-high six tackles in the Oct. 28 win over Morehead State at Brown Field.

Prep: Compiled 10 varsity letters and three all-conference honors, one in football and two in track and field... Led the team in receiving yards and kick return yards a senior... All-State honorable mention in football... As a sophomore, won the team's Rookie of the Year Award... As a junior, was named BSN Student Athlete of the Week and Offensive Most Improved... As a senior, notched the team's MVP Award... Also played basketball, winning the Coaches Award his junior year and the Reichal Award, given to the teammate with the best overall combo of sportsmanship, skill and attitude/composure... Led the team in rebounds... In track and field, was named the Male MVP as a junior and Field MVP as a senior, four-time varsity Award... Also won school's Male Athlete of the Year Award... Multiple times on honor roll.

Personal: Son of Buffy Singleton... Majoring in business... Born on Sept. 12, 1998... Hobbies including drawing and skateboarding.