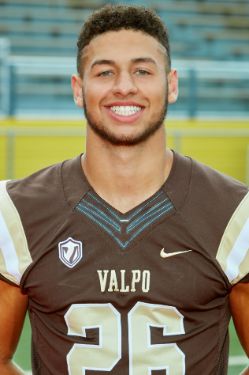 2017: Burst onto the scene as a freshman, appearing in all 11 games and leading the team in receptions (32), receiving yards (539), yards per catch (16.8), touchdown receptions (5) and receiving yards per game (49.0)…Led all PFL freshmen in receiving yards per game, total receiving yards and yards per catch… Hauled in a 50-yard reception at Montana on Sept. 2 for his first career catch. Later in that game, made a 33-yard TD grab for his first collegiate score. Finished his collegiate debut with three catches for 93 yards… Had his first career two-touchdown game on Sept. 30, helping Valpo to a 27-24 win over Stetson. Totaled 100 receiving yards against the Hatters, which stood as his season high… Became just the fourth Crusader in the last 10 years to surpass 500 yards receiving in a season, joining Tanner Kuramata, Andrew Cassara and Sean McCarty… Longest catch of the season was a 79 yarder on Oct. 28 against Morehead State… Had a season-high six receptions Sept. 16 at Trinity International. Also had three rushes for 18 yards against the Trojans, both season highs.