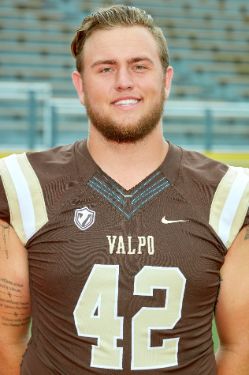 2016: Saw action in three games as a sophomore... Played in the first three games of the season... Notched a tackle on Sept. 17 against Trinity International.

2015: Saw action in a pair of games in his first season with the Crusaders ... debuted Sept. 3 at Eastern Kentucky, picking up a pair of tackles ... also played Oct. 10 at Drake ... member of PFL Academic Honor Roll.

Prep: A three-year letter winner for the Braves...was named First Team 3A All-State his senior season...earned Academic All-State honors...was a Brave Award recipient (Lineman of the Year) his senior season after being runner-up the year prior...helped team to first sectional, regional and semi-state victories in school history as a junior...also lettered in track...recipient of the J. Patrick Sheehy Award, given annually to the senior who has shown enthusiasm for the goals of the Brebeuf community...served as secretary of the Student Council...member of National Honor Society...graduated with high honors (3.75 GPA)...named Wendy's High School Heisman recipient for Brebeuf.

Personal: Jake is the son of Chet and Stacey Iery ... majoring in marketing.