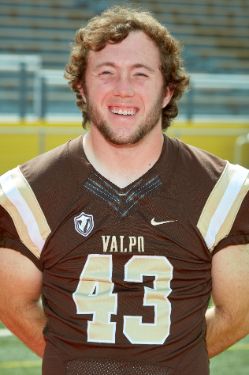 2016: Played in two games, Sept. 3 at Illinois State and Sept. 17 vs. Trinity International... Had five tackles, three against the Redbirds and two against the Trojans... Had 1.5 TFL... Member of the PFL Academic Honor Roll.

2015: Saw action in eight games during his sophomore season ... tallied a tackle in each of the season's first two games, Sept. 3 at Eastern Kentucky and Sept. 12 against Sacred Heart ... returned a kickoff for six yards Oct. 17 versus Dayton ... member of the PFL Academic Honor Roll.

2014: Appeared in two games in his rookie campaign with Valpo...made his collegiate debut versus Missouri Baptist on Oct. 11, when he recorded four tackles...logged a tackle at Dayton (Nov. 1)...was named to the PFL Academic Honor Roll.

Prep: A four-year letter winner for Todd Kuska and the Mustangs...went 32-12 in his four years at St. Rita...named to First Team All-Chicago Catholic League his senior year...elected Defensive Most Valuable Player...selected as team captain...also earned three letters in volleyball and one in wrestling...named captain of volleyball team his sophomore year and captain of wrestling team his freshman season...member of National Honor Society...made Honor Roll all four years.

Personal: John is the son of John and Deborah Regan... Majoring in accounting.