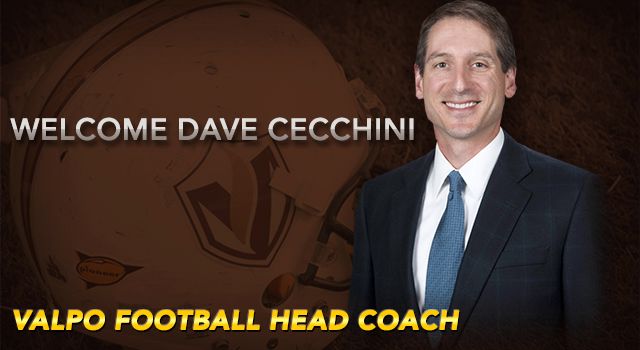 "We made up a list of all the attributes that would be important for our next head coach, and Dave met every one of them. Everyone we've talked to about Dave indicated that he was not only an outstanding football coach, but an outstanding leader of young men," LaBarbera said.

Cecchini most recently served as offensive coordinator/quarterbacks coach at Lehigh University for four seasons. It was his second stint with the Mountain Hawks. Cecchini also worked in the same capacity at The Citadel and Harvard, having coached Tennessee Titans quarterback Ryan Fitzpatrick and Arizona Cardinals receiver Andre Roberts.

"I'm beyond excited about the opportunity that has been provided to me by Mark LaBarbera and President Heckler. It's humbling to be brought in and shown the vision for this University, and to then be included in it," Cecchini said.

Cecchini assumed the role of offensive coordinator/quarterbacks and wide receivers coach at Harvard in 2003, where his offensive aptitude yielded immediate dividends. Harvard's 2003 offense averaged 461 yards per game, good for 4th in the nation in total offense that year. The 2004 Crimson team crafted a perfect 10-0 record en route to an Ivy League Championship. Harvard set 14 team or individual offensive records with Cecchini at the controls (2003-2006). In 2005, he was bestowed the American Football Coaches Association's Mike Campbell Top Assistant Coach Award after Harvard produced the top offense in 2005.

He is a 1995 graduate of Lehigh. An All-American wide receiver in his playing days, Cecchini established numerous single-season school and Patriot League records including receptions (88), receiving yards (1,318), and touchdown receptions (15) in addition to leading the country in receptions and receiving yards per game.

Cecchini joined the Mountain Hawk coaching staff the fall following his graduation from Lehigh. For the next several seasons he worked his way up, holding the position of quarterbacks coach, wide receivers coach, running backs coach, and tight ends coach before ultimately being named assistant head coach in 2001.

Cecchini and his wife, Tammy, have two sons, Evan and Will.

What They're Saying About Dave Cecchini:

Former Harvard and current Tennessee Titans quarterback Ryan Fitzpatrick: "I really enjoyed Coach Cecchini not only as a coach but as a man. He helped me a lot in my college years. He helped me grow up, he taught me a lot about the game of football, and really taught me a lot about being a great husband and father. He had a lot of characteristics that I really looked up to, and I think he’s going to make a great head coach."

Lehigh head football coach Andy Coen: “I am very happy for Dave and his family to have this opportunity. Dave is an outstanding coach but more importantly an outstanding person.  I have no doubt that Dave is ready for the challenge of becoming a head coach. I know this has been a goal of his for some time. I support him and wish him nothing but the best. I look forward to watching Dave build Valparaiso into a winner.”

The Citadel head football coach Kevin Higgins: “Valpo made a great decision in hiring Dave Cecchini as its Head Coach. I have watched Dave grow from an All-American wide receiver to a very successful offensive coordinator leading several programs to multiple championships. He is a man of character and integrity that will be a great role model for his players. There aren’t many brighter coaches in the country than Dave.”

Harvard University head football coach Tim Murphy: "Dave Cecchini was an outstanding assistant coach for us and no doubt will be an outstanding head coach at Valparaiso. He's smart, passionate and has outstanding leadership skills. A very smart move by Valparaiso."