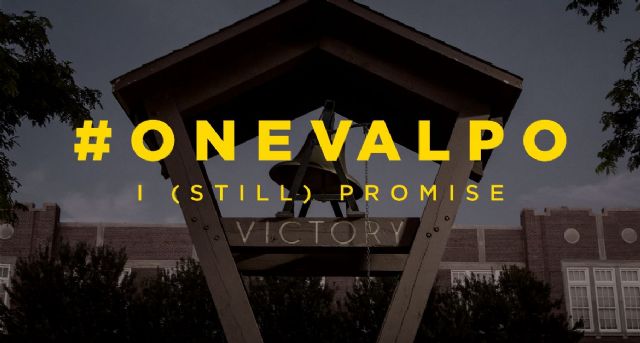 I recognize that words on a page alone will not create a lasting change, but as a symbol of my intent to participate, I am making this promise.

To do the work of intentional self-reflection, examine my world view, challenge my biases, and to educate myself on ideas, beliefs, cultures, and life experiences that are different from my own.

To listen with empathy, share with vulnerability, and act with compassion to create a community of belonging. To actively engage with issues of social justice, and to use my strengths, my means, and my voice to work on behalf of positive change. To stand against prejudice, bigotry, and racism, and to stand for kindness, fairness, and equity. To remember that we are in this together, all of us, and our true power is found both in our differences and in our unity.

We are ONE.
One Team. One Community. One People.
#oneVALPO

History of the #oneVALPO Promise

Valpo Athletics unveiled its reimagined #oneVALPO promise, the product of the department’s “I Still Promise” initiative, in February 2021.

The #oneVALPO initiative was created by former Valpo men’s soccer head coach Mike Avery and his program in response to members of the team being subjected to racial slurs during a nonconference game in 2013.

“We are proud of Valpo Athletics’ history of inclusion stretching back to the 1950s,” Director of Athletics Mark LaBarbera said. “This commitment to respect for all was clearly demonstrated by the original #oneVALPO promise — a promise created by a Valpo coach and student-athletes as a way to take a constructive stand against overt acts of racism. We’re very pleased with the conversations and department-wide interactions that have resulted in the ‘I Still Promise’ initiative and a reimagined #oneVALPO promise. We started the process by going through the history of #oneVALPO and reminding everyone of the promise’s origin not only as a stand against racism, but also as a way to bring us closer together as the Valpo Athletics family. This led into the new #oneVALPO promise, which I believe speaks to our ongoing commitment against racism and to supporting members of the Valpo Athletics family in a more actionable way. I’d like to thank Mike Avery for his help in facilitating the process.”

“I’ve always been incredibly proud of the #oneVALPO promise — the story of how it came into existence, the people involved and the people it looked to represent,” Avery said. “At its core, #oneVALPO was just me trying to coach my team through a difficult set of circumstances, and it was me trying to show those players that they were loved and valued and respected. The fact that #oneVALPO grew into something more and something bigger was exciting, and an honor that came with some responsibility that we all took very seriously.”

Now, the Valpo Athletics family engaged in meaningful, productive and respectful discussions to develop a reinvigorated message that provides clarity, comfort and a purposeful move to combine action with celebration and education.

“There was a thought, long after we started down that path with the #oneVALPO promise, that we could improve it,” Avery said. “Especially in light of more recent events in our country and around the world, there was a feeling that the original promise needed some amending. It needed fewer words to make it more memorable, and it needed some call to action as an addition to the language of celebration. The ‘I Still Promise’ document accomplishes both of these things. There still is the emphasis of mutual respect and the celebration of diversity that was at the foundation of the promise, but we’ve successfully added the opportunity to stand for and stand against some of the injustices we are all continuing to fight.”

The process included input from student-athletes, coaches, administrators and other staff members and was facilitated by Avery.

“You don’t often get a chance to revisit your biggest win as a coach and somehow make it better, so I’m very thankful to have had just that opportunity,” Avery said. “I’ve always viewed #oneVALPO as my biggest win, and now it’s even better.”