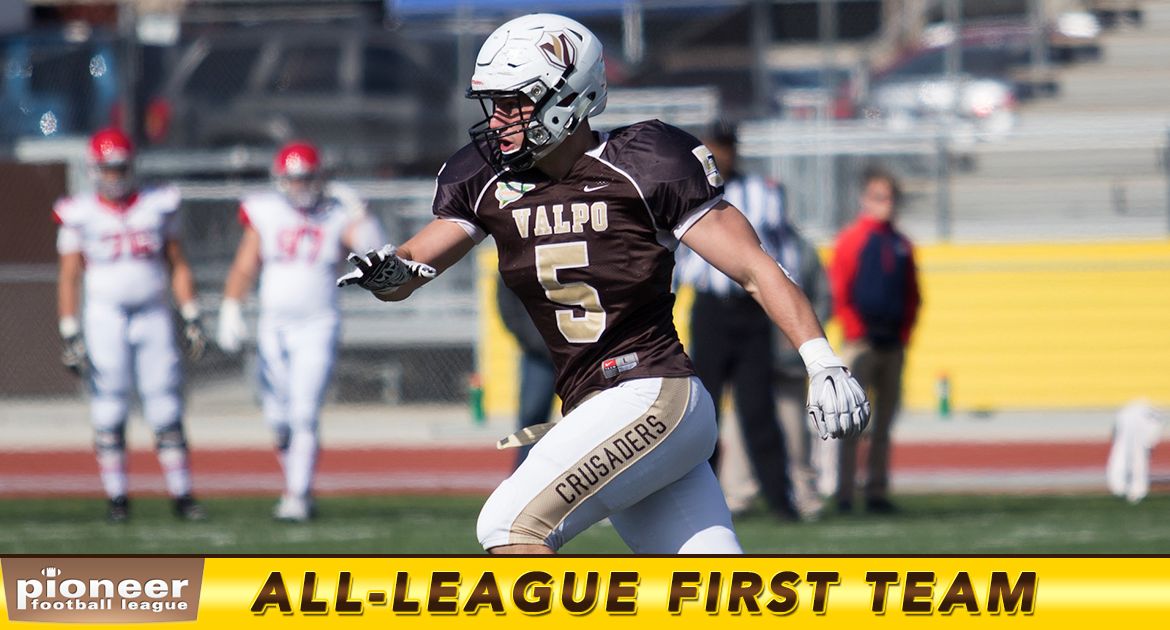 Green led the Crusader defense in tackles for the third consecutive season, amassing 117 stops in ten games. His 11.7 tackles per game average led the PFL and was eighth in all of FCS football. Green also finished 11th in the country - and second in the league - in solo tackles per game, at 6.2.

This year's award represents his third over a highly-productive Crusader tenure. The owner of 359 career tackles, Green was an All-PFL Second Team honoree in 2014 after receiving Honorable Mention notoriety as a sophomore in 2013. He is the first Crusader defensive player to earn First Team recognition since Jimmy Riker did so in 2006.

Guilford, who racked up 12.0 tackles for a loss at defensive end, was named to his third All-PFL Honorable Mention team (2012, 2014). The senior notched a TFL in all but two games, and was a PFL Defensive Player of the Week nominee on Oct. 18th after recording six tackles - 3.5 for a loss, including 2.5 sacks - versus eventual league champion Dayton the day prior. Guilford leaves Valpo with 40 career tackles for a loss.

Cotton, the defensive end opposite Guilford, compiled 4.5 tackles for a loss as part of his 41-tackle campaign. His two fumble recoveries tied for the third-most in the PFL. The senior also snagged an interception, broke up two passes, and tallied two quarterback hits. Cotton's biggest game of 2015 came in the season finale versus Morehead State when he recorded two tackles for a loss and scooped up a fumble before taking it 32 yards the other way.

Nunes nabbed his second All-PFL Honorable Mention prize in as many years after registering 76 tackles in various positions on the defensive side. Nunes started all ten games, forcing a pair of fumbles (recovering one), picking off a pass, and breaking up five pass attempts. The junior projects as one of the most seasoned veterans on the 2016 roster.

Norberg, a freshman, experienced a productive PFL season. Brought in as an H-back, he hauled in 14 passes for 130 yards, including two touchdowns in 2015. His 138 total receiving yards was fourth amongst all Valpo receivers.

The announcement of the 2015 All-PFL Teams comes a day after the league revealed its major award winners. Morehead State's Austin Gahafer and Stetson's Donald Payne were named Offensive and Defensive Players of the Year, respectively. Dayton's Rich Chamberlin reeled PFL Coach of the Year for the second time after guiding Dayton to a 10-1 regular season and the Flyers' first-ever appearance in the FCS playoffs.

The league is expected to unveil its Scholar-Athlete of the Year on Wednesday.